The charts below, derived from Nielsen//NetRatings and Pew Internet data, show trends in connection speeds to the Internet for users in the United States.*

Home users in the US set a milestone in August, passing the 60% broadband penetration mark for the first time.
Narrowband users (56Kbps or less) now comprise 38.68% of active Internet users, down 1.4 percentage points from 40.08% in July 2005 (see Figure 1).

We asked Bruce Leichtman about the significance of this major milestone.

“Broadband is one of the fastest adopted products/services in the history
of this country, and the US leads the world in the number of broadband
subscribers. The DSL and cable operators have been aggressively pushing the market
over the past year and half, while it may be difficult to keep up the pace
set over the past 18 months, there is still plenty of opportunity to keep
the net adds running at a very healthy rate over the next 4-5 years.” – Bruce Leichtman of LeichtmanResearch.com

Most workers in the US enjoy high-speed connections to the Internet. Most use a high-speed line such as a T1 connection, and share bandwidth between computers connected to an Ethernet network. The speed of each connection decreases as more employees hook up to the LAN. As of August of 2005, of those connected to the Internet, 85.46% of US users at work enjoy a high-speed connection, up 3.82 percentage points from the 81.64% share in July. At work, 14.54% connect at 56Kbps or less (see Figure 3).

Broadband Adoption Slows in the US

According to a recent report by Pew Internet & American Life Project broadband adoption in the United States is slowing down. John Horrigan, Pew’s Director of Research, compared national surveys of Internet users in 2002 to 2005. Horrigan found that the intensity of Internet use (a product of connection speed and years of online experience) drives the number of online activities people perform, which in turn drives the adoption of broadband (processing more bits). The two factors (speed and experience) vary in their influence of use over time. In 2002 both having broadband at home and Internet experience were significant factors in Internet usage. However, in 2005 only having broadband at home had a significant influence on intensity of Internet usage (see Figures 4 & 5). This implies that there is little pent-up demand for broadband at home. We talked to John Horrigan about his findings.

“We don’t see a large influx of new Internet users in the U.S. anytime soon. 6% of the Internet’s population are new users, and only 23% of them are on broadband, about half the overall rate. Current dialup users are less engaged in the Internet than past dialup users.”

Dialup users today are older, less affluent, and less educated than their 2002 counterparts. With switching costs still high, today’s dialup users are less likely to switch to broadband than they were in 2002. The report concludes that slowing broadband growth may add pressure on policymakers to take a bold approach (municipal wireless broadband networks for example) to catch up to leading broadband countries like Korea or Canada.

Drivers of Intensity of Internet Use – 2002 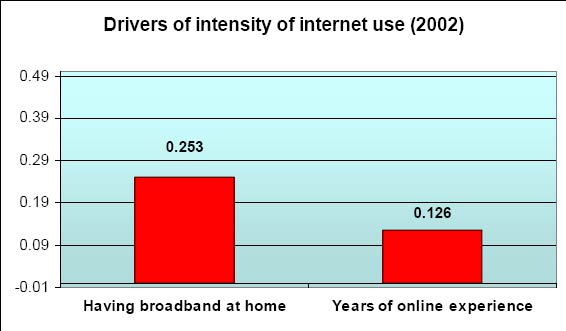 Drivers of Intensity of Internet Use – 2005 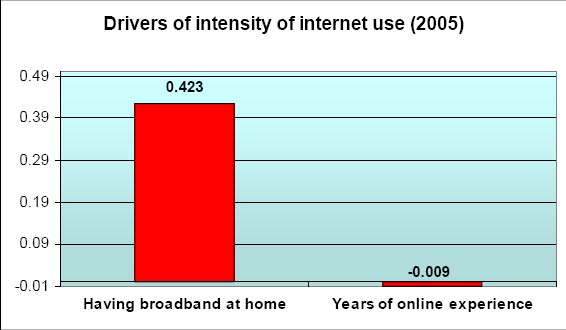 Dutton, W., Gennaro, C., & Hargrave, A (2005), “The Internet in Britain: The Oxford Internet Survey (OXiS) May 2005,”
This 2005 survey revealed that 61% of the UK has Internet access at home. Between 2003 and 2005 broadband penetration grew from 19% to 59% for Intenet-enabled UK households. For all British households broadband penetration grew from 11% to 36% from 2003 to 2005. Oxford Internet Institute, University of Oxford, UK (available on the Internet at http://www.oii.ox.ac.uk).
Frieden, R. (2005), “Lessons from broadband development in Canada, Japan,
Korea and the United States,”
This article shows how government-led incentives and technology incubation can yield higher broadband penetration rates and lower cost per MB. Unlike the US, with its shorter-term “incubate and depart” for private industry model (witness the rapid growth of the Internet), leading broadband countries take a long-term approach to incubating and facilitating broadband development. The “key regulatory initiative pursued by nations such as Canada, Korea and Japan lies in effectively changing the regulatory climate without triggering costly and protracted litigation…” The author recommends “incremental deregulation” to promote an environment favorable to ICT (Information and Communications Technologies) development. In the US “…unmetered basic telephony, has created disincentives for consumers to migrate to available, but unsubsidized broadband services.” The author concludes the US has failed “to appreciate the need to blend and integrate both private sector entrepreneurialism and public sector stewardship.” Telecommunications Policy 29 (2005) 595-613. Available on the Internet at http://www.sciencedirect.com.
Horrigan, J. (2005), “Broadband Adoption at Home in the United States: Growing but Slowing,”
Using national survey data from 2002 to 2005, the author concludes that broadband adoption is slowing in the US. Broadband providers have harvested the “low-hanging fruit” and find the pickings to be slim among the remaining dial-up users. The data reveals that online experience is becoming less of a factor towards broadband adoption, resulting in less pent-up demand for broadband among the aging online population. In a paper presented to the 33rd Annual Telecommunications Policy Research Conference, September 24, 2005. Pew Internet & American Life Project. Available on the Internet at http://www.pewinternet.org/pdfs/PIP_Broadband.TPRC_Sept05.pdf
Lee, H. & S. Yongwoon (2005), “Do we need broadband? Impacts of broadband in Korea,”
Using Korea as a leading example, this paper explores the assumption that improved broadband infrastructure yields social and economic benefits. By mid-2003
Korea achieved a broadband penetration rate of 77 percent out of 14.3 million homes connected at the speed of over 2Mbps. The authors attempt to prove the link between widespread broadband deployment and economic success by quantifying the growth of various factors that are influenced by wider broadband distribution. In electronic commerce Korea experienced a five-fold increase in Internet banking users from 2000 to 2003, Online shopping and stock trading showed similar trends, albeit at lower rates. Computer game companies, some of which rely on high-bandwidth realistic simulations, grew by 3.8 times from 1999 to 2002 (694 to 2633 companies). Exactly what percentage of this rapid economic growth was due to the widespread availability of broadband is difficult to quantify. The authors provide anecdotal evidence that shows as broadband penetration and speeds increase, economic benefits follow. Info -The journal of policy, regulation and strategy for telecommunications, vol 7 No. 4, pp 47-56.
Leichtman Research Group
Provides broadband data and trends from the FTC and other reliable sources. Tracks the number of cable and DSL subscribers in the US from the major broadband providers.
Nielsen//NetRatings
Provides the US broadband data (percentage of active Internet users) for the Bandwidth Report.
Two Out of Every Five Americans Have Broadband Access at Home (PDF)
“The number of Americans with broadband access reached 42 percent of the U.S. population in August.” Nielsen//NetRatings press release of September 28, 2005.

The Bandwidth Report is featured monthly on URLwire – news of useful and unique web content since 1994.