The Effects of Market Saturation

As the market adoption of a technology increases, its growth rate naturally decreases. So as markets get more saturated, a lower percentage of the population is able to adopt new technologies. We’re seeing this effect in worldwide broadband penetration rates (see Figure 4). North America and Western Europe lead the world with 18% and 17% broadband penetration by population respectively but have growth rates below 6%. Meanwhile South and East Asia, Eastern Europe, and Latin America show higher growth rates but lower saturation levels. Asia-Pacific came in third at 7.6% penetration. 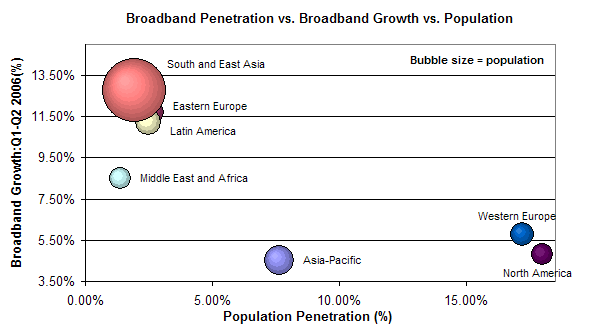 Broadband Growth Over the Past Quarter

Overall, South Korea led all countries surveyed with 85.1% of all households subscribed to broadband. Iceland came in a close second with 85% penetration, followed by Hong Kong at 81.5%, and Monaco at 75.7% (see Figure 6).

Broadband Growth Trends in the UK

In the UK, Point Topic predicts that broadband penetration will nearly double by 2008, fueled by the rapid adoption of DSL-based broadband (see Figure 7).

Broadband Growth Trends in the UK

A geographic forecast map of broadband penetration by household shows that penetration will nearly double, from 34% at the end of 2005 to 64% three years later (see Figure 8). As the map shows, the remote rural areas where penetration is lowest today (dark red on the map) will grow fastest and catch up with the rest of the country. But the highest take-up will continue to be in prosperous areas of the South East of England. By end-2008 between 80% and 90% of homes will have broadband across a large part of the South East (dark green on the map).

In September 2006, broadband penetration in US homes grew 1.46 percentage points to 76.33%, up from 74.87% in August. This increase of 1.46 points is above the average increase in broadband of 1.1 points per month over the last six months (see Figure 10). At current growth rates US broadband penetration should break 80% among active Internet users by December 2006.

China will pass US in Broadband Lines by late 2006 – Worldwide Broadband Survey
A previous prediction based on data from Telecompaper. China will pass the US in total broadband subscribers by the end of 2006.
Nielsen//NetRatings
Provided the US broadband penetration data for active Internet users for the Bandwidth Report.
Point Topic
Provided the worldwide and UK broadband data and forecasts.