Users of Apple’s iTunes player grew by nearly 69% over the past year (see Figure 1), but by only 26% since January. Among the big four streaming media players, only RealPlayer showed significant growth compared to Apple since the beginning of 2006. Broadband growth continued its steady climb in November, growing by 1.1% percentage points to 77.7% among active Internet users. 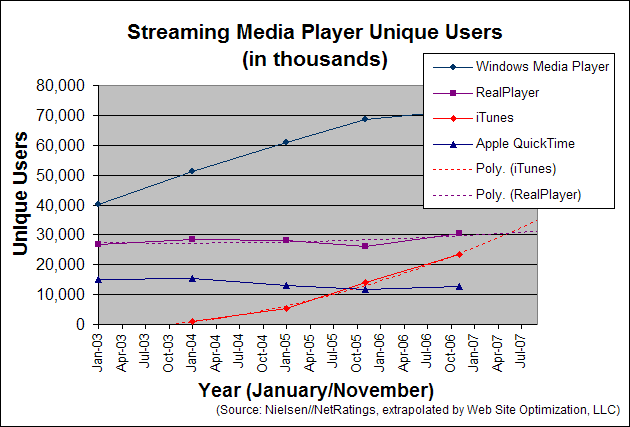 There were disputed reports of a slowing in iTunes growth recently. While iTunes’ yearly growth rate has actually increased to nearly 70%, from January to November 2006 iTunes usage grew by only 26.3%. It appears that the December holiday rush plays a critical role in yearly growth. We’ll revisit the streaming media landscape once the Janauary 2007 figures are available. 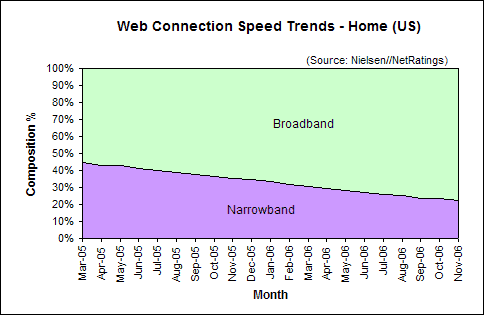 In November 2006, broadband penetration in US homes grew 1.08 percentage points to 77.68%, up from 76.6% in October. This increase of 1.08 points is near the average increase in broadband of 1.03 points per month over the last six months (see Figure 3). At current growth rates US broadband penetration should break 80% among active Internet users by mid-January 2006. 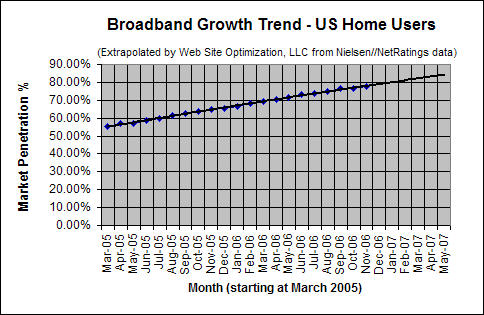 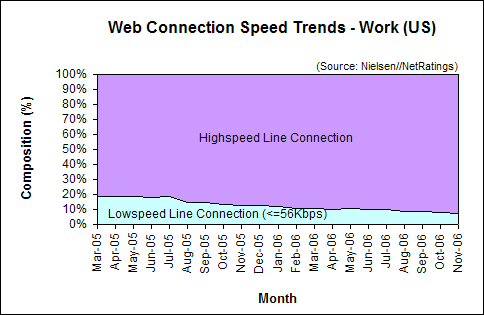 Conflicting Reports on iTunes Sales Declines
A New York Times story published recently cited a report from Forrester Research analyst Josh Bernoff, which inferred that since the ratio of iTunes songs sold per iPod sold has been steadily rising, a disconnect could be occurring between the two products in a changing portable media market. BetaNews, Dec. 13, 2006.
Gloomy iTunes Predictions Premature
A New York Times followup to their initial iTunes slow growth story. The imminent demise of iTunes appears to have been somewhat exaggerated. New York Times, Dec. 13, 2006.
Nielsen//NetRatings
Provided the streaming media player data and US broadband penetration data for active Internet users for the Bandwidth Report.
Sales of iPods and iTunes Not Much in Sync
Based on a recent survey the numbers suggest that iPods are not driving iTunes sales as much as early supporters may have expected. New York Times, Dec. 11, 2006.