53% of all US households now subscribe to a broadband high-speed Internet service at home, according to Leichtman Research Group. Broadband services now account for about 72% of all home Internet subscriptions – compared to 60% last year. Broadband adoption is strongly tied to household income. Just 45% of households with annual incomes below $30,000 subscribe to an Internet service at home – compared to 92% of households with annual incomes above $75,000. Broadband penetration among active Internet users grew to 82.18% in US homes in May, up over 10 percentage points from 71.76% last year. 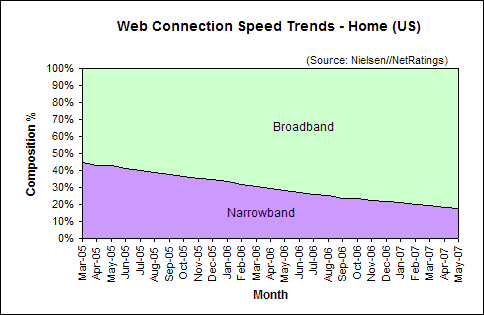 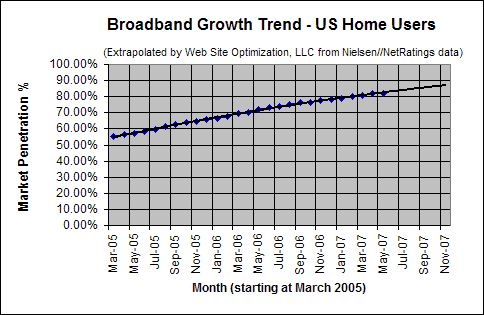 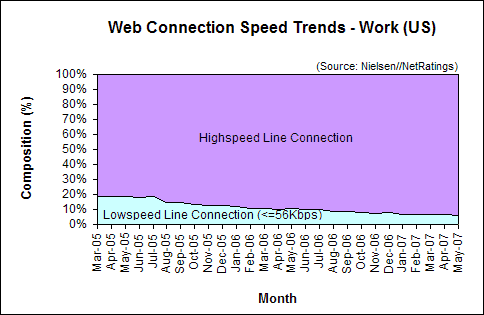 Leichtman Research Group
LRG research notes of 2Q 2007 reported that 53% of all US households now subscribe to a high-speed broadband Internet service.
Nielsen//NetRatings
Provided the US broadband penetration data for active Internet users for the Bandwidth Report.
Point Topic
Worldwide broadband subscribers approached 300 million at the end of March 2007. “Given the prevailing growth rates it is safe to assume that the number has now passed 300 million,â€ says Katja Mueller, Research Director at Point Topic. June 13, 2007.