At current growth rates, broadband penetration among active Internet users should break 90% by mid-2008 in the U.S. Overall, broadband penetration is 57% in U.S. households, according to a recent Leichtman Research survey. In a related study by Connected Nation, the U.S. could realize an economic impact of $134 billion annually by accelerating broadband availability across all states. 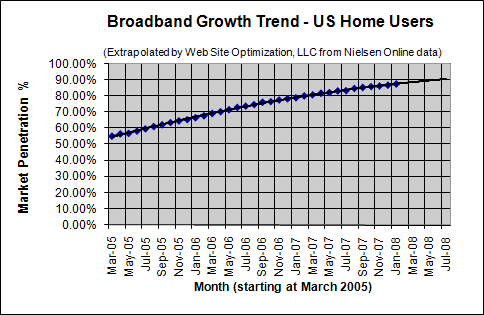 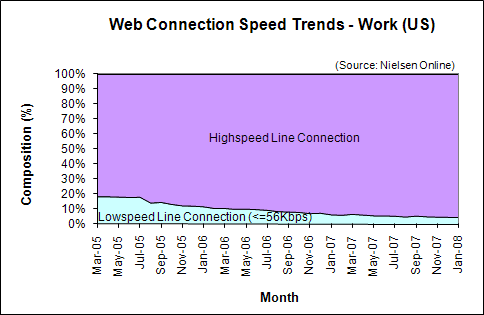 The Economic Impact of Stimulating Broadband Nationally
The U.S. could realize an economic impact of $134 billion annually with 2.4 million new jobs by accelerating broadband availability and use across all states, according to a study by Connection Nation. Feb. 21, 2008.
Leichtman Research
Provided the overall US broadband penetration data.
Nielsen Online
Provided the US broadband penetration data for active Internet users for the Bandwidth Report.
Study: More U.S. broadband has $134 billion economic impact
A study by Connected Nation says that just a 7 percent increase in U.S. broadband adoption could create as many as 2.4 million jobs and add $134 billion to the economy.