European Wi-Fi usage is growing more than twice as fast as the US. At current growth rates, Europe is poised to pass North America in wireless Internet usage (see Figure 1). Due to popular demand, the FCC has redefined the speed of broadband. Among active Internet users in the US, 88.4% now use broadband. 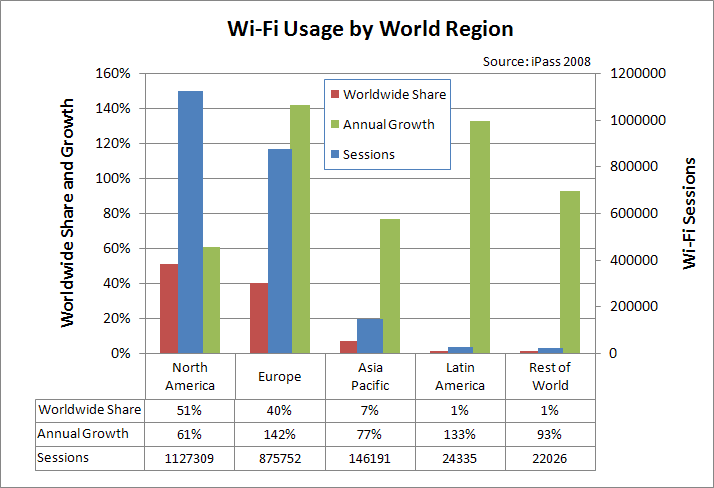 Wireless usage grew by 89% in the second half of 2007, according to a recent survey by iPass. While European wireless users expanded their share of sessions from 31% to 40% over the past year, North America dropped from 59% to 51% worldwide. European wireless usage grew at more than twice the rate of North America annually, with Europe growing at 142% versus North America at 61% over the past year. Other highlights of the iPass study are: cyber cafes lead all venues for wireless access, the US leads all countries for wireless sessions at 51%, with the UK second at 13%, Germany third at 10%, Switzerland fourth at 4%, and the Netherlands fifth at 3%. London leads all cities in total wireless sessions, with Singapore, Tokyo, New York, and Chicago rounding out the top five. 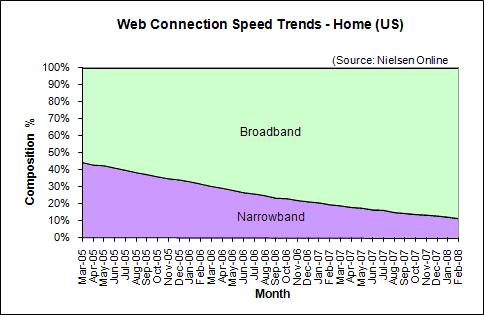 In February 2008, broadband penetration in US homes grew 0.9 percentage points to 88.39%, up from 87.49% in January. This increase of 0.9 points is above the average increase in broadband of 0.67 points per month over the last six months (see Figure 3). At current growth rates, broadband penetration among active Internet users will break 90 percent by April or May of 2008. 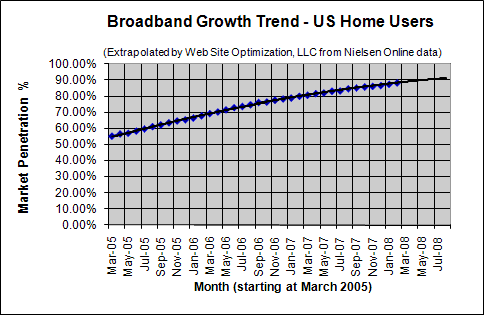 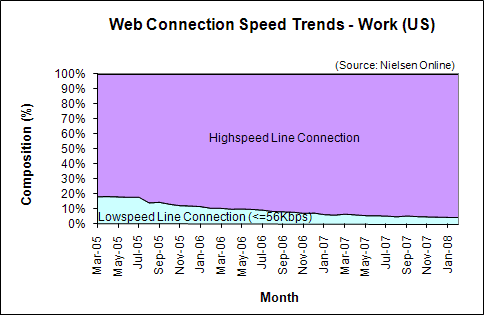 Business Use of Wi-Fi Hotspots Nearly Doubles in 2007; Use of 3G Mobile Broadband on the Rise
European Wi-Fi use is growing more than twice as fast as North America. The iPass Mobile Broadband Survey ending Dec. 31, 2007 found North America with 51% of worldwide Wi-Fi sessions growing at 61% annually with Europe at 40% of Wi-Fi sessions growing at 142% per year. iPass, March 10, 2008.
FCC approves new method for tracking broadband’s reach
“Federal regulators on Wednesday voted to overhaul the way they measure how widely broadband is available across the United States.” This move came shortly after the FCC released a report based on the old standards. CNET News.com blog, Mar. 19, 2008.
FCC Finally Realizes 200kbps is Not Broadband
The FCC has voted to increase its definition of broadband from 200Kbps to 768Kbps, as well as adding upload speeds to reporting requirements. They have also scrapped zip-code tracking for more fine-grained census-track level reporting. DLSReports.com, Mar. 19, 2008.
Nielsen Online
Provided the US broadband penetration data for active Internet users for the Bandwidth Report.