Broadband penetration in US households grew to 57% in March. Some 12 percent of consumers borrow free wireless connections, according to a new survey. Among active Internet users, broadband penetration grew by only 0.43 percentage points over the past month to 88.82%.

Broadband Penetration Grows to 57% in US Homes

Among primary residence US households, broadband penetration grew to 57% in March 2008 (see Figure 1), according to Leichtman Research Group.
Broadband penetration has grown on average 8.25 percentage points each year, but appears to be slowing down in the past year. Note that these figures show broadband growing by 250% since 2003, which is in line with the 300% figure reported by Scarborough Research since 2002. 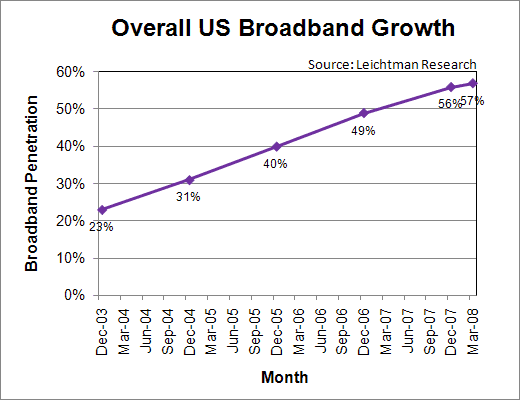 Although it is illegal in some parts of the world, 12% of US and UK respondents to an Accenture survey have logged onto someone
else’s unsecured Wi-Fi network. Using other people’s Wi-Fi is more common in the US than in the UK. About 1 in 7 piggyback in the US, while 1 in 11 do the same in the UK. The practice is more common among 18 to 34-year olds, with nearly one-third piggybacking onto unsecured networks.

Accenture found that people are engaging in unsafe computer practices. Nearly half of all respondents said that they use the same password for all of their accounts, and only a quarter have encrypted files on their computers. 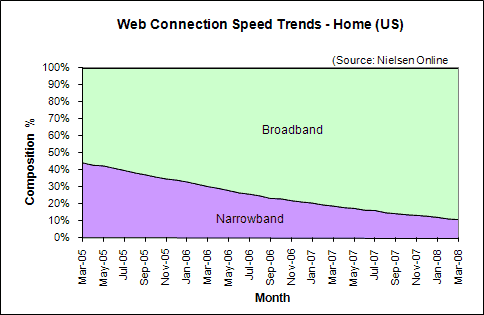 In March 2008, broadband penetration among active Internet users in US homes grew 0.43 percentage points to 88.82%, up from 88.39% in February. This increase of 0.43 points is below the average increase in broadband of 0.61 points per month over the last six months (see Figure 2). At current growth rates, broadband penetration among active Internet users will break 90 percent by May of 2008. 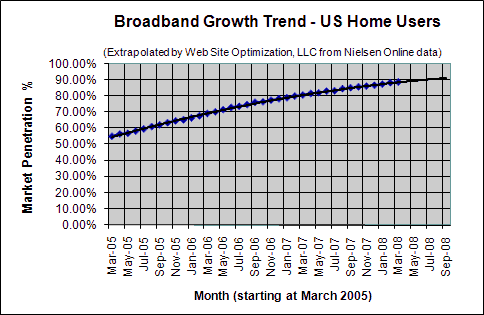 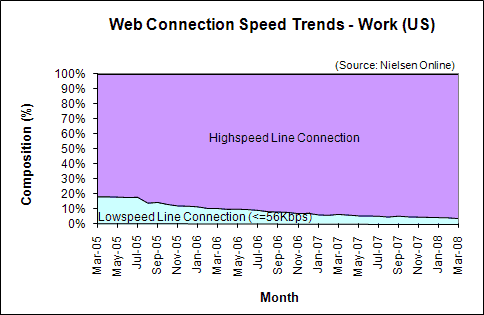 Leichtman Research Group
Provided the overall broadband penetration data for Figure 1, for primary residence US households. Based on FCC data and LRG research estimates.
Nielsen Online
Provided the US broadband penetration data for active Internet users for the Bandwidth Report.
Survey: 12% of consumers ‘borrow’ free Wi-Fi
Although illegal in some parts of the world, 12% of U.S. and U.K. respondents to an Accenture survey have logged on to someone else’s unsecured Wi-Fi connection. The practice is more widespread in the US with 1 in 7 piggybacking onto free wireless networks, while 1 in 11 did the same in the UK. April 16, 2008, Network World.
The Need for Internet Speed: Broadband Penetration Increased More than 300% Since 2002
112 million Americans have broadband in their household, according to a survey from Scarborough Research. Since 2002, broadband penetration has increased by more than 300%. April 15, 2008, Scarborough Research.