The FCC has approved the regulated use of the “white spaces” between and among the unused analog TV channels, for unlicensed devices. With the transition to digital television by February 2009, the soon to be empty analog channels can be used for other purposes. Some estimate that wireless providers could use the lower frequency TV spectrum to provide universal broadband access for every household in America for as little as $10 per month (Calabrese and Scott 2006). In other news, among active Internet users, broadband penetration in the US grew to 92.08% in October 2008, up 0.28 percentage points over last month.

With the move to digital television, the question becomes what to do with all of those unused analog TV channels? Despite opposition by the entrenched broadcast television media, many have lobbied to release this unused spectrum to the public to create a widespread, low-cost wireless network. The rules adopted by the FCC on November 4, 2008, will allow for the use of unlicensed devices in the unused TV spectrum to provide broadband data and other services for consumers and businesses. Since the lower frequencies used in television broadcasting travel farther than higher frequncy WiFi and WiMAX signals and better penetrate buildings, this ruling by the FCC opens the way for wide-spread deployment of broadband over rural areas and the United States.

FCC Chairman Kevin Martin said that the approval of rules authorizing the use of TV white spaces spectrum “is a significant victory for consumers… Opening the white spaces will allow for the creation of a WiFi on steroids.”

In one study by the New America Foundation and the Free Press, from 30% to 82% of the TV band spectrum will be vacant after the transition to DTV (Calabrese and Scott 2006). These vacant TV channels (unused television frequencies between 54-698 MHz [TV Channels 2-51]) are the perfect vehicle for a new universal wireless broadband network. By some estimates, the wireless broadband industry could deliver universal broadband Internet access of at least 10Mbyte per second to every American household for as little as $10 a month, using these white spaces. 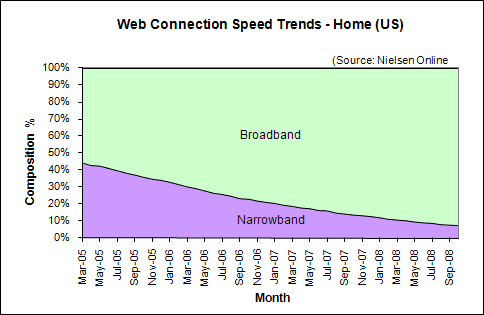 In October 2008, broadband penetration among active Internet users in US homes grew by 0.28 percentage points to 92.08%, up from 91.8% in August. This increase of 0.28 points is less than half the average increase in broadband of 0.6 points per month over the last six months (see Figure 2). Broadband growth appears to be slowing down in the past few months as penetration reaches saturation, at least among active Internet users. 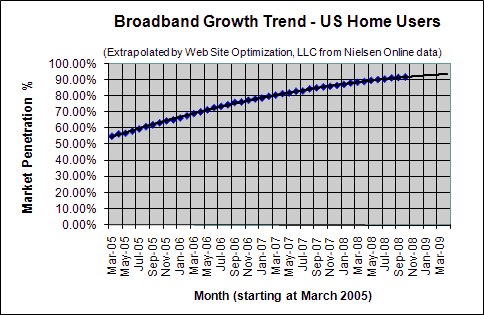 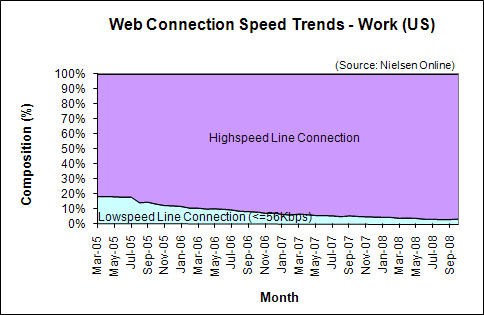 Calabrese, M., and B. Scott, 2006. “Measuring the TV ‘White Space’ Available
for Unlicensed Wireless Broadband“
“The transition to digital television offers a new and important opportunity to take advantage of an underutilized but
valuable public resource – the empty broadcast TV channels known as ‘white spaces’ – to foster universal, affordable
broadband Internet services. When the DTV transition ends in early 2009, every one of the nation’s 210 TV markets will
have 15 to 40 unassigned and vacant channels reserved for broadcasting, but not in use.” Their conservative estimates are that anywhere from 15 to 41 vacant channels (or 30% to 82% of the TV Band Spectrum empty after digital) will become available after the transition to digital television. New America Foundation, Jan. 5, 2006.
Free the Airwaves
Google’s successful effort to free up the unused white space of analog TV channels.
Nielsen Online
Provided the US broadband penetration data for active Internet users for the Bandwidth Report.
Reardon, M. 2008. FCC chairman backs use of ‘white space’ spectrum
This CNET article has more details on the frequency range of the TV spectrum in question. Oct. 15, 2008. CNET News.com
SpectrumPolicy.org
The New America foundation’s wireless future program.
Stillwell, A. 2008. FCC Adopts Rules for Unlicensed Use of Television White Spaces
“In its continuing efforts to promote efficient use of spectrum and to extend the benefits of such use to the public, the Federal Communications Commission (FCC) today adopted a Second Report and Order (Second R&O) that establishes rules to allow new, sophisticated wireless devices to operate in broadcast television spectrum on a secondary basis at locations where that spectrum is open.” Alan Stillwell, Nov. 4, 2008.
The Wireless Innovation Alliance
A wide variety of organizations formed this wireless coalition and successfully lobbied the FCC to open up the unused TV spectrum to innovation.