More than half of all Americans, some 56%, have accessed the Internet by wireless means. For laptop users, over 81% have connected to the Internet wirelessly, according to PEW Internet. By the end of 2010, Clearwire plans to extend WiMAX coverage to 120 million Americans across 80 markets, according to Akamai. Among active Internet users, nearly 93% connect to the Internet over a broadband connection. Note that our July 2009 broadband survey starts anew with a larger sample size from Nielsen.

More than Half of all Americans go Wireless

In an April 2009 survey, PEW Internet asked Americans if they had accessed the Internet through wireless means. More than 56% responded that they had, using laptops, cell phones, and game consoles to go online and access the Internet. Some 39% of all Americans have used a laptop to go online wirelessly.
In fact, among the 47% of Americans with laptops, over 81% have connected wirelessly using WiFi or AirCards. 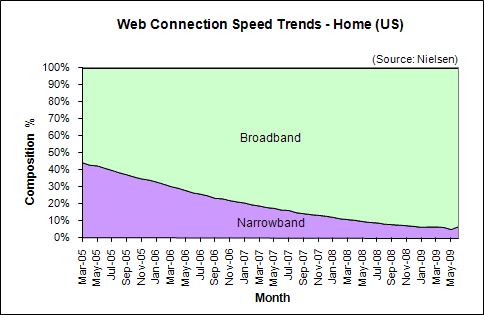 In June 2009, broadband penetration among active Internet users in US homes dropped to 92.96%. This was largely due to a larger sample size used for the Nielsen broadband survey, nearly 8 times larger (see Figure 2). The abrupt drop in the Figure 2 graph is due to this change in sample size, and should not be compared directly with the previous month’s data. 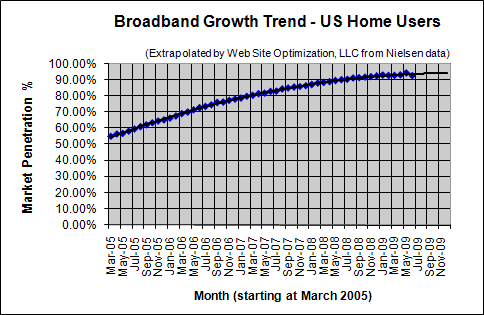 As of June 2009, 98.47% of US workers connected to the Internet with broadband, with 1.53% connecting at 56Kbps or less (see Figure 3). Note that this is a significant jump higher than May’s 96.91% broadband penetration rate. This is due mainly to the new methodology and larger sample size used by Nielsen in the Netspeed survey. 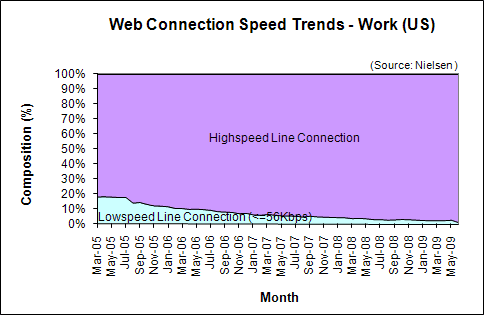 Akamai
According to Akamai’s “The State of the Internet” report, Clearwire will invest between $1.5 to $1.9 billion in 2009 to deply WiMAX networks in Atlanta, Las Vegas, Chicago, Charlotte, Dallas/Fort Worth, Honolulu, Philadelphia and Seattle, and will roll out services in cities such as New York, Boston, Washington DC, Houston and San Francisco in 2010. Overall, Clearwire plans to enable WiMAX coverage for up to 120 million Americans by the end of 2010. Akamai, Q1 2009.
Nielsen
Provided the US broadband penetration data for active Internet users for the Bandwidth Report. For our July 2009 broadband survey we have some new more accurate data for you from June. Effective June 2009 Nielsen has made some improvements to the NetView service, including an expanded panel that is 8 times larger to give improved accuracy and representation of the population at large (the active online population that is). Nielsen found that broadband grew 8% from May to June. This is a larger month over month increase than previously found, so the larger panel increased their estimate of the broadband universe. However, the narrowband universe grew 45% from May to June. Thus the number of broadband users didn’t decrease, it increased by 8%, but the increase in the number of narrowband users found caused the penetration rate to shift. This explains the drop from the previous month’s penetration of 94.65% to nearly 93%. These figures are not directly comparable to the previous month’s data, so they should be viewed directionally.
Wireless Internet Use
Survey of Americans on their wireless internet use found that 56% of all Americans have used a wireless device to access the Internet. Over 80% of laptop users have accessed the Internet wirelessly. From “Wireless Internet Use,” by John Horrigan, July 2009.