The FCC has identified key broadband gaps in US broadband policy. A Harvard study commissioned by the FCC found that open access to broadband lines through local loop “unbundling” is one key factor in fostering widespread adoption of broadband in the US and other countries. Meanwhile in the US broadband penetration among active Internet users grew to 93.27%.

As part of its mission to present to congress a National Broadband Plan by mid-February 2010, the FCC commissioned a study by Harvard’s Berkman Center for Internet and Society. Using data from the OECD and other sources, the study found that open access “unbundling” policies in other countries is one key factor to widespread broadband adoption and lower prices. “While Congress adopted various open access provisions in the almost unanimously-approved Telecommunications Act of 1996, the FCC decided to abandon this mode of regulation for broadband in a series of decisions in 2001 and 2002.” Making additional wireless spectrum available is another key factor, as wireless devices proliferate. “It appears that the United States opened the first decade of the 21st centuries in the top quintile in penetration and prices, and has been surpassed by other countries over the course of the decade.” 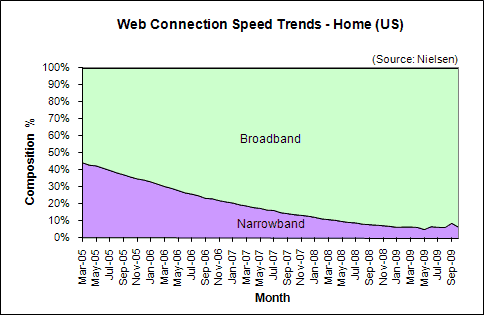 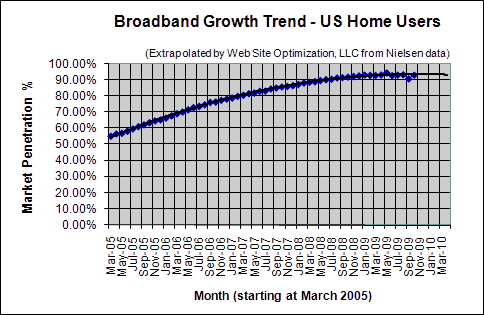 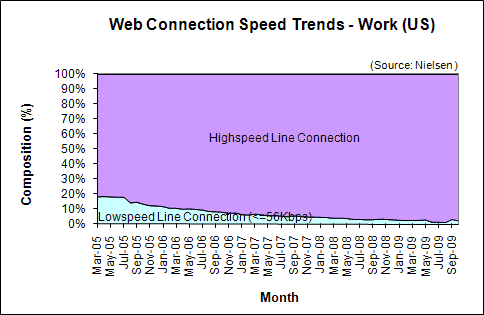 FCC Identifies Critical Gaps in Path to Future Universal Broadband
A task force developing draft proposals for the FCC’s National Broadband plan due on February 17, 2010 has identified critical gaps in US policy towards universal broadband availability. Those gaps include the Federal Universal Service Fund lack of support for broadband deployment adoption despite its $7 billion budget, a consumer information gap with a lack of data about broadband speeds and prices, a looming spectrum gap for wireless devices, and a deployment gap. FCC, Nov. 18, 2009.
Next Generation Connectivity: A review of broadband Internet transitions and policy from around the world
Tasked by the FCC to study broadband adoption policies around the world, the Berkman Center released this draft report in October. Based primarily on OECD data the study found that unbundling “open access” policies are key to increasing competition, lowering prices, and spreading broadband quickly among the countries surveyed. Yochai Benkler, The Berkman Center for Internet & Society at Harvard University, October 2009 (draft).
Nielsen
Provided the US broadband penetration data for active Internet users for the Bandwidth Report.