North America and the US are the heaviest users of the Internet, surpassing Europe and Asia according to a recent study. Despite remaining in 15th place overall in broadband penetration (OECD 2009), the US leads the world in broadband users, and is essentially tied for second with France in overall usage, behind only South Korea. Among active Internet users, broadband penetration in US homes jumped to 94.45% in November 2009.

North America including the US leads the world in overall Internet usage, according to a recent study by US Telecom. In a letter submitted to the FCC in December, US Telecom calculated the total usage of the average user in developed countries and regions worldwide. They found that North America leads all regions in overall usage with 14.5 gigabytes used per user per month. Second was Western Europe at 13.35 gigabytes per month, followed by all of Europe which used 9.7 gigabytes a month, trailed by Asia at 8.5 gigabytes per month (see Figure 1). On a country by country basis, South Korea led the pack with the average user consuming 24.51 gigabytes a month, followed by France at 14.26 gigabytes a month, and the US at 14.24 gigabytes of bandwidth a month in a virtual tie for second. Germany (12.89 GB), the UK (11.94 GB), Italy (10.85 GB) and Japan (9.9 GBs per user) trailed in bandwidth utilization. 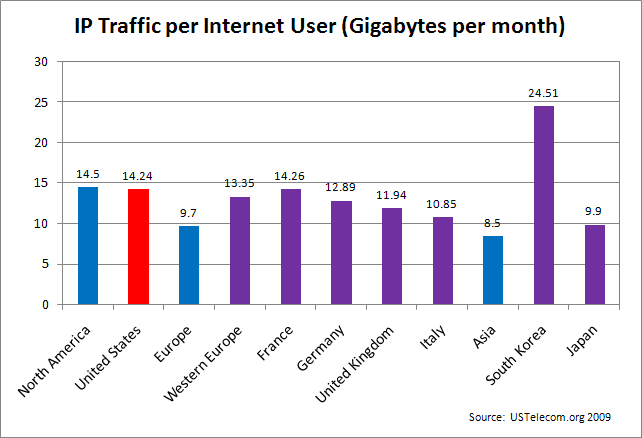 “Nearly 1,400 U.S. broadband providers invest approximately $60 billion annually to upgrade and expand the nation’s high-speed Internet infrastructure. The U.S. also is unique in the world for having two robust and competing wired broadband platforms with a national footprint, delivering a choice not only of service providers, but technologies, to more than 4 out of 5 U.S. households – before considering wireless and other emerging options.”

Worldwide, the average broadband connection generates 11.4GBs of Internet traffic per month, or 375 megabytes per day, according to the Cisco Visual Networking Index, upon which the USTelecom study is based. Thus the average broadband user generates traffic about equal to downloading 3,000 text e-mails per day or 100 MP3 music files per day, according to Cisco. Perhaps Verizon and other wireless carriers should rethink their 5 GB allowance. 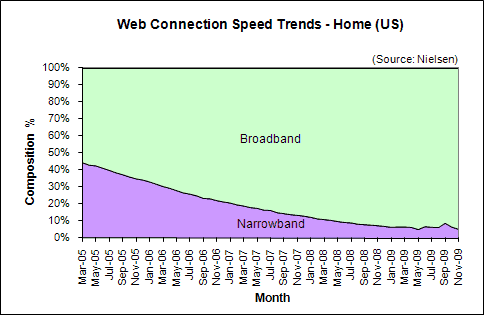 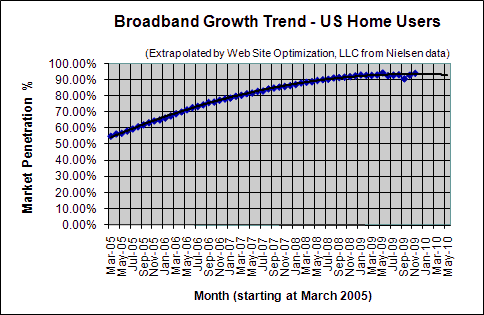 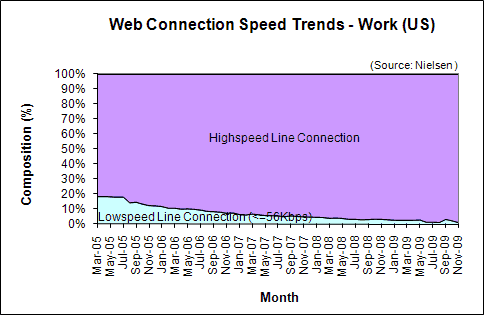 Cisco
See the Visual Networking Index for half of the data for the US Telecom study.
Internetworldstats.com
Provided the data for Internet users for the USTelecom study.
Nielsen
Provided the US broadband penetration data for active Internet users for the Bandwidth Report.
US Telecom
Sent a letter to the FCC taking a different look at the broadband data available. Rather than focus on raw speed and penetration, USTelecom looked at actual usage among developed countries. Viewed in these terms, the US ranks near the top in Internet usage (third), and leads the world in total broadband subscribers (see OECD 2009 data). Used country and regional traffic data from CISCO Visual Networking Index divided by the number of Internet users from Internetworld Stats Data as of September 30, 2009.