Over two-thirds of the world’s population have a mobile phone subscription, according to a recent report by the ITU.
Mobile subscriptions drive wireless broadband growth,
with mobile broadband growing faster than fixed broadband lines and second only to mobile phone growth itself.
Meanwhile in the US, broadband penetration grew to 95.1% among active Internet users
in January 2010.

Two-Thirds of World are Mobile Subscribers

There were an estimated 4.6 billion mobile cellular
subscriptions by the end of 2009, corresponding to 67 subscribers per 100 inhabitants
globally. By the end of 2009, mobile cellular penetration
in developing countries passed the 50 per cent
mark reaching an estimated 57 per 100 inhabitants, more than doubling since 2005 when it stood at 23 per cent.
Developed countries have a mobile penetration rate that
exceeds 100 per cent. Mobile subscriptions drive mobile technology use, with mobile broadband
subscriptions up to 9.5% of the world’s inhabitants at the end of 2009. Mobile broadband growth eclipsed fixed broadband growth
in 2009, and was second only to mobile phone subscriptions. 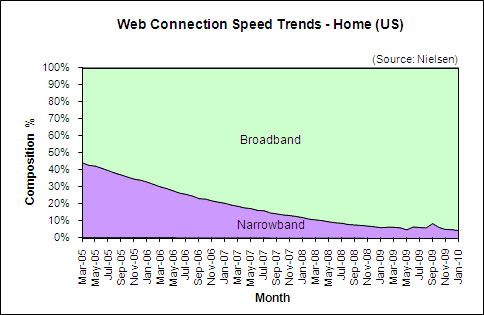 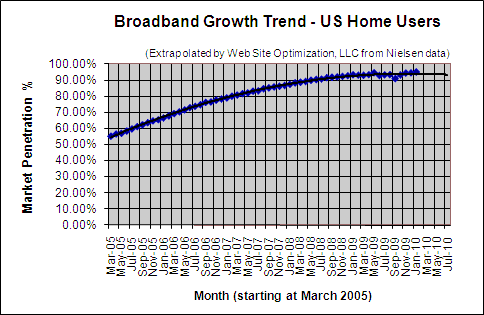 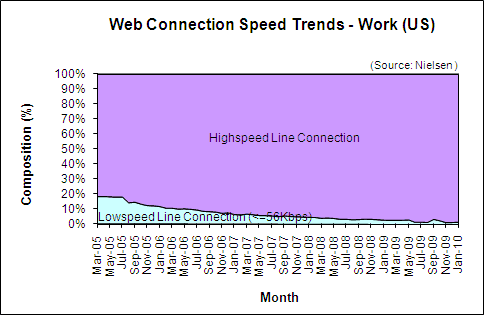 The FCC’s National Broadband Plan
aims to bring 100M bps (bits per second) Internet service to 100 million homes by
2020. PC World, Feb. 16, 2010.
New ITU report shows global uptake of ICTs increasing, prices falling
By the end of 2009 there were 4.6 billion mobile subscriptions globally, corresponding to a penetration rate of 67 percent, the ITU’s annual report on developments in the information and communication technologies (ICT) sector showed.
Mobile broadband is growing faster than fixed broadband subscribers, second only to cell phone growth. 9.5 percent of global inhabitants were on mobile broadband connections. Intenational Telecommunication Union, Feb. 23, 2010.
Next Generation Connectivity
An exhastive study of the spread of broadband throughout the world by The Berkman Center for Internet & Society at
Harvard University. Using existing literature and studies about broadband deployment and usage
throughout the world and this project helped inform the FCC’s efforts in developing the National Broadband Plan. Harvard University, Feb. 16, 2010.
Think big with a gig: Our experimental fiber network
Google is building a 1GB/s ultra high-speed broadband network. Feb. 10, 2010, Google. See also Vancouver Sun article on Google’s High-Speed Broadband Network.
Nielsen
Provided the US broadband penetration data for active
Internet users for the Bandwidth Report.