Despite the Obama administration’s promise of “universal access” to broadband in the US, rural areas have been left behind in wired broadband availability. To close this “broadband gap” low-population-density rural areas are adopting wireless broadband faster than urban areas, according to a recent study by Georgetown University (Macher & Mayo 2011). Will spectrum supply keep up with demand? 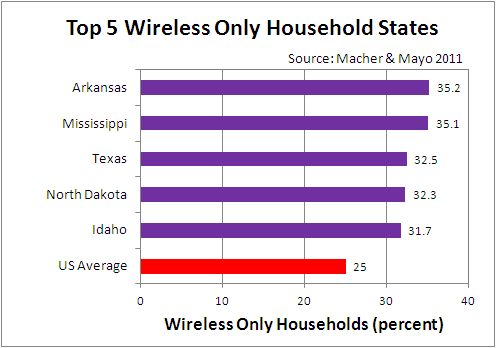 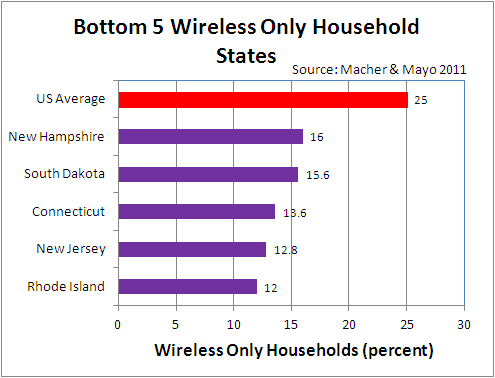 Running Out of Bandwidth?

The demand for wireless broadband may outstrip supply if action is not taken to increase the available wireless spectrum. By 2015 consumer use of wireless applications will be nearly 60 times today’s volume (McAdam 2011). Yet, spectrum constraints (the slow distribution of the existing wireless spectrum) have hampered the private sector’s ability to deploy wireless broadband in sparsely populated areas where it is needed most. Indeed, the head of Verizon Communications recently wrote an op-ed piece in the New York Times lamenting the slow rollout of the wireless spectrum (McAdam 2011). Of course, the slower rural deployment could have something to do with the higher profits available in denser urban areas.

Wireless broadband promises to be the most efficient path to universal broadband access in rural areas. Predominantly rural states in the US are adopting wireless technology at a faster clip than urban states. However, our need for speed is being hampered by the slow release of the wireless spectrum on which these vital networks are built.

Macher, J. & J. Mayo, “Achieving Rural Universal Service in a Broadband Era: Emergent Evidence from the Evolution of Telephone Demand.” Georgetown University, Oct. 2011.</
The Georgetown researchers used an empirical analysis of the CDC’s survey of 160,000 US households to adopt wireless technology between 2003 and 2009. The researchers found that after controlling for other demand determinants, population density of a household’s county is inversely related to the demand for wireless telephony.
McAdam, L. “Running Out of Bandwidth.” New York Times, Oct. 21, 2011.
The CEO of Verizon Communications urges Congress to open up the wireless spectrum and to allocate precious digital real estate faster to keep up with increasing demand.
Reilly, M. “Wireless Broadband Taking Bigger Slice of Local Market.” Minneapolis St. Paul Business Journal, Oct. 10, 2011.
More people are getting their broadband from wireless providers in the Twin Cities and fewer are using traditional services like cable and DSL, according to a new study.