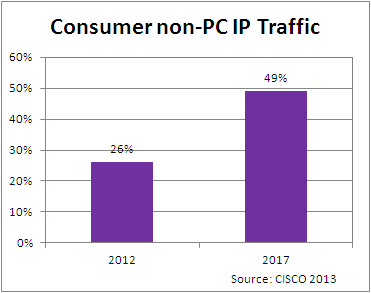 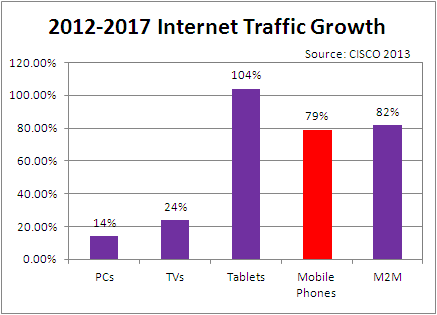 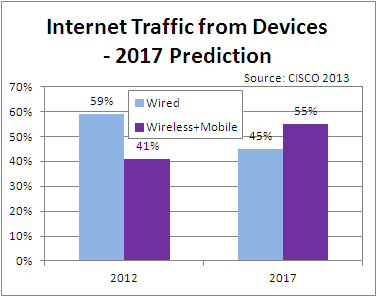 By 2017, the Asia Pacific region will dominate global Mobile Internet traffic with nearly 2 exabytes of data and about 1/2 the global share of traffic (see Figure 4). 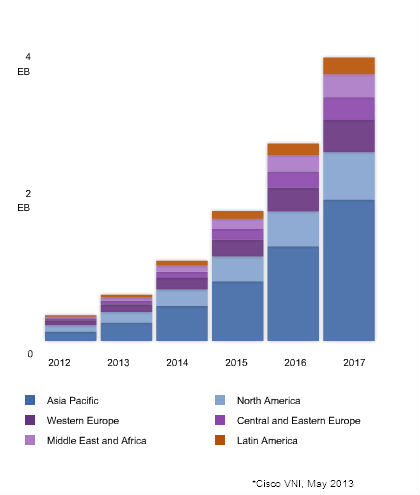 In 2013 mobile devices accounted for 15-20% of web traffic, depending on which analyst you believe. In the next 4-5 years the share of mobile and wireless traffic will nearly double. By 2017 mobile+wireless traffic will exceed desktop traffic. At these growth rates, mobile share will exceed 30-40% of all web traffic by 2016-2017. These trends show the importance of mobile-optimized websites (“responsive”) and mobile website performance.

Mary Meeker is Back with her 2013 Internet Trends Report Slides
Mobile now makes up 15% of Web traffic, up from 10% a year ago. Mary Meeker Internet Trends Report, May 29, 2013.
Cisco’s Visual Networking Index Forecast Projects Nearly Half the World’s Population Will Be Connected to the Internet by 2017
Global IP Traffic Predicted to Grow Three-fold from 2012 to 2017.
Cisco’s Visual Networking Index
Based on Cisco’s own internal data and other sources the VNI predicts Internet trends with nifty interactive apps.