The District of Columbia had the fastest connection speeds among the United States, according to a recent survey. The US came in 17th worldwide in broadband penetration. The average US household, however, enjoys less than half the broadband speed of the average South Korean household.

The United States came in 17th overall in broadband penetration worldwide, according to a recent survey. The USA had 75% of the population on broadband connections of 4Mbps or more (see Figure 1). South Korea led all countries with a penetration rate of 93% at the 4Mbps level, followed by Switzerland at 90%, Curacao at 87%, the Netherlands at 87% and the Czech Republic at 83%. Of the top 10, Curacao had the highest growth rate with an 87% increase in broadband subscriptions over the last year. South Korea had the lowest growth rate at 7.4% (approaching 100% saturation). This compares to the global average broadband penetration rate of 53% (above 4Mbps) and 27% yearly growth. 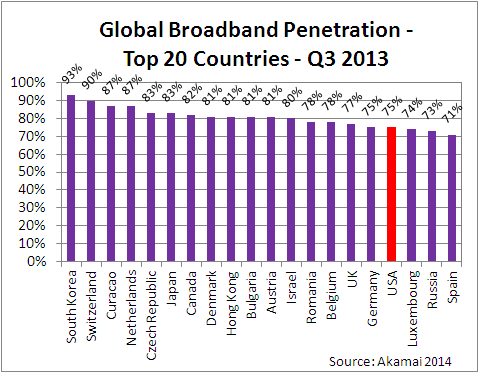 South Korea led all countries surveyed with an average connection speed of 22.1 Mbps (see Figure 2). Japan followed with 13.3 Mbps, Hong Kong at 12.5 Mbps, the Netherlands at 12.5 Mbps, and Swizerland at 11.6 Mbps. The US came in 8th worldwide with an average broadband connection speed of 9.8 Mbps. The Czech Republic had the highest growth rate in average broadband speed with a 49% increase over the last year. 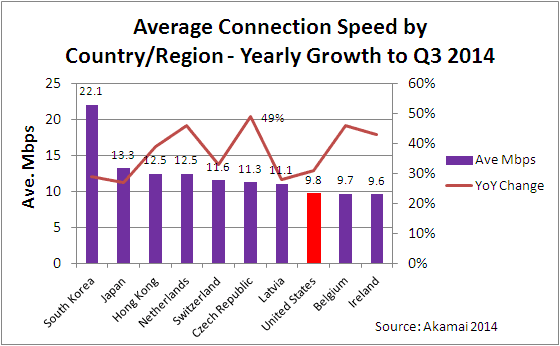 DC Tops in Broadband Speed in US States 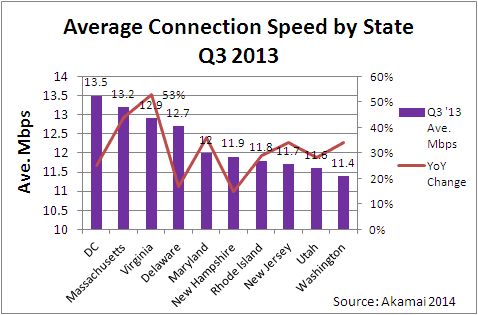 Delaware Tops in US Broadband Penetration 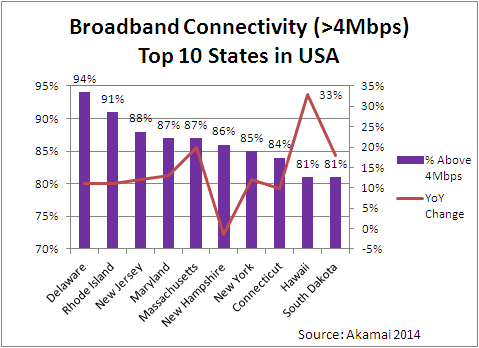 Akamai
Akamai’s State of the Internet report for Q3 2014 was released in late January 2014. Thanks to Akamai’s staff for supplying the Michigan broadband statistics.