Users of iTunes grew by 47.5% over the past year, while the other streaming media players had single-digit growth. At current growth rates iTunes users will exceed RealPlayer users by the second quarter of 2007 (see Figure 1). European broadband growth has decreased in recent months. US broadband growth slowed a bit in January, growing by 0.62% percentage points to 79.1% among active Internet users. 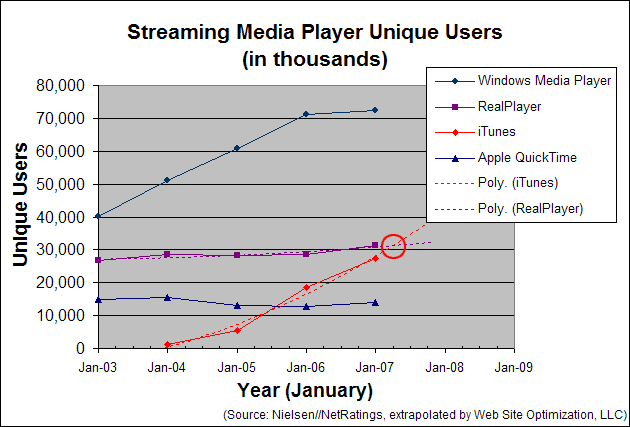 Over the past year, the number of unique users of Apple’s iTunes player grew by 47.5%. Over the same time period, RealPlayer users grew by 9.1%, QuickTime by 8.7%, and Windows Media Player grew by 2.0% according to data provided by Nielsen//NetRatings (see Table 1). At current growth rates, iTunes should pass RealPlayer in unique users by the second quarter of 2007. Apple should be whistling a happy tune this year. While iTunes continues to show strong double-digit growth rates, Windows Media Player growth appeared to slow over the past year.

Overall, broadband take-up decreased across Europe from 23% to 14% growth in the half year period before September 2006, according to ECTA. ECTA attributes the slower growth in broadband uptake to incumbent telecommunication monopolies in key countries. However, there were some countries that exhibited higher growth rates such as Germany (15%), Ireland (30%) and Greece (63%). The UK passed Belgium (2.9% growth) to become fifth among European countries in broadband penetration (see Figure 2). Denmark leads all European countries surveyed with a 30.3% broadband penetration rate, followed by the Netherlands at 29.8%, Finland at 26%, Sweden at 24.4%, and the UK at 20.2% broadband penetration per capita, according to data provided by ECTA. The Netherlands should pass Denmark in broadband penetration this year, due to their higher growth rate of 11.1% versus Denmark’s 3.6%. The Office of National Statistics reported that 79.2% of all connections to the Internet in the UK are via broadband, with most people connecting at 2Mb/sec or less. 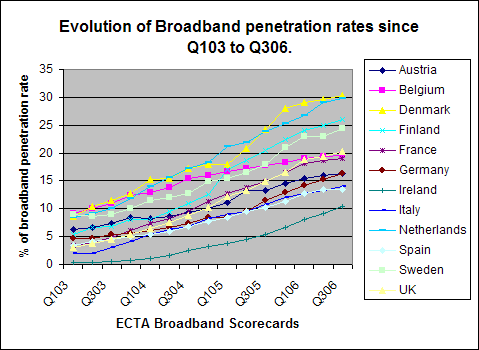 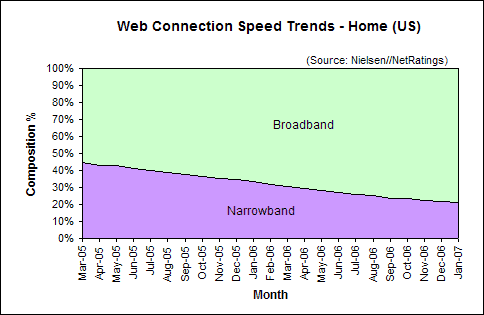 In January 2007, broadband penetration in US homes grew 0.62 percentage points to 79.03%, up from 78.45% in December. This increase of 0.62 points is below the average increase in broadband of 0.9 points per month over the last six months (see Figure 4). At current growth rates US broadband penetration should break 80% among active Internet users by March 2007. 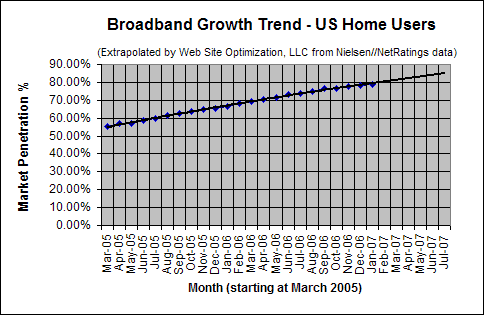 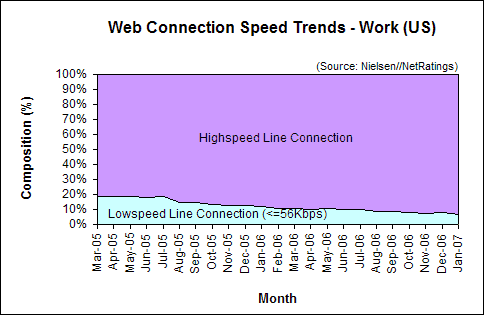