As predicted, iTunes passed Realplayer in unique users near mid-2007. The higher growth rate of iTunes propelled it past RealPlayer for the first time in April of 2007. Among the four major streaming media players, only iTunes had a positive growth rate over the past year. Among active Internet users in the US, broadband increased to 86.8% in December 2007.

Apple’s iTunes player passed RealPlayer in unique users in 2007 (see Figure 1). iTunes is the only player to show a positive growth rate over the past year, growing by 26.8% from Dec. 2006 to Dec. 2007 (see Table 1). QuickTime usage fell 8.6%, RealPlayer fell 17.5%, and Windows Media Player was essentially flat over the past year. Note that the growth trend lines show a more accurate picture without the monthly fluctuations. Both QuickTime and RealPlayer were essentially flat, while Windows Media Player grew slightly. Only iTunes showed a significant positive growth rate. 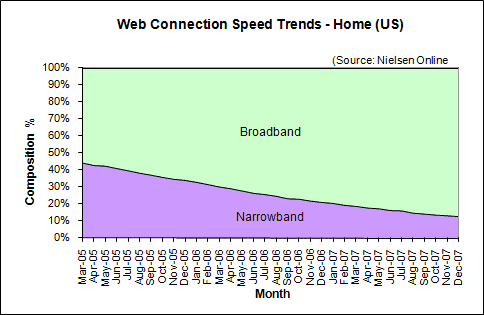 In December 2007, broadband penetration in US homes grew 0.5 percentage points to 86.79% up from 86.29% in November. This increase of 0.5 points is below the average increase in broadband of 0.68 points per month over the last six months (see Figure 3). At current growth rates, broadband penetration among active Internet users will break 90 percent by May 2008. 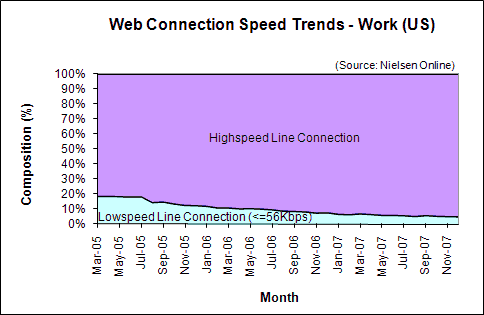