YouTube continues to dominate the top video sites tracked by Nielsen Online. Updating last year’s top 10 video site survey this year we find YouTube even further ahead of its nearest “competitor,” Google. As of July 2008, YouTube had more than 7.5 times more unique viewers than Google Video. Combined together, Google properties YouTube and Google Video have over 88 million unique viewers, and make up over 36% of the share of videos viewed on the Internet. A recent study by the Communications Workers of America revealed that the US ranks 15th worldwide in broadband speed. In other news, US broadband penetration crept up 0.27 percentage points to 90.76% in July 2008. 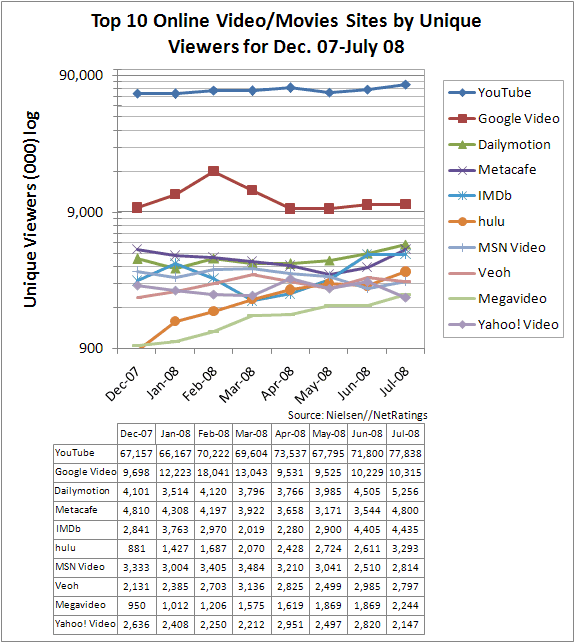 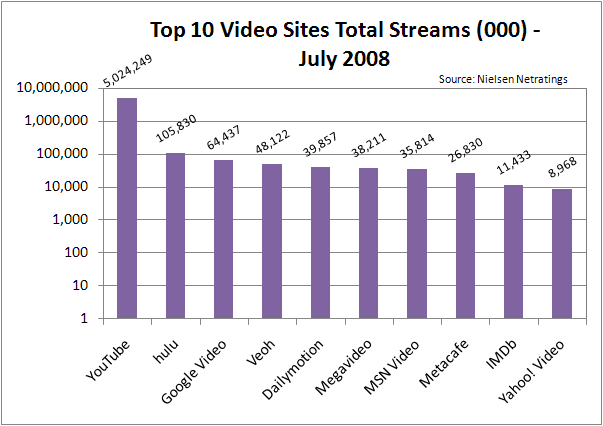 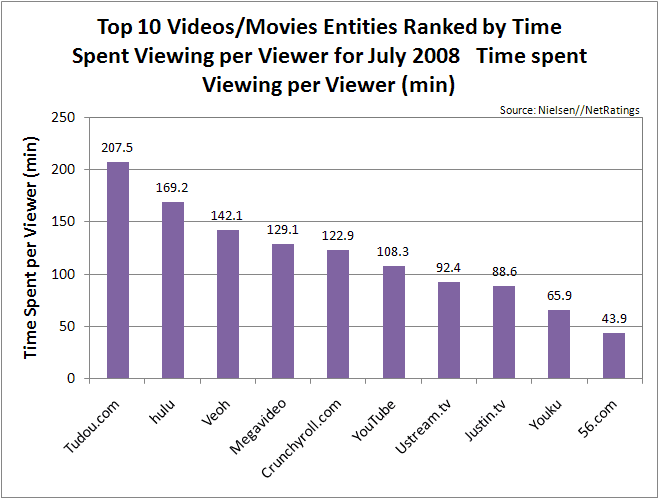 A recent broadband study by the Communications Workers of America revealed that the US ranks 15th among all countries surveyed in broadband speed. The median download speed in the U.S. was 2.3 megabits per second (Mbps), while in Japan the connection speeds are as high as 63Mbps, nearly 30 times faster. As an example, people in Japan can download an entire movie in just two minutes, but it can take two hours or more in the United States. The US also trails South Korea at 49Mbps, Finland at 21Mbps, France at 17Mbps, and Canada at 7.6Mbps.

The US has made little progress over the past year in increasing broadband speeds. Between 2007 and 2008, the median download speed increased by only four-tenths of a megabit per second (from 1.9 mbps to 2.3 mbps). At this rate of growth, the US would take more than 100 years to catch up with current rates in Japan. Despite the increased speed subscribers in Japan pay about as much for their broadband as their counterparts in the US. Rhode Island ranked first among the 50 states in broadband download speed, while Alaska ranked last. Michigan ranked 20th, with an average download speed of 2.57Mbps.

Various studies (cited below) show that the composition of traffic on the Internet will shift towards video. Internet video is now about 25% of consumer Internet traffic and will reach 32 percent by the end of 2008. By 2012, the sum of all forms of video will amount to close to 90 percent of consumer traffic. Global IP traffic will double every two years through 2012, according to a Cisco 2008 study. From 2005 to 2008, high volume (over 100Mb/day) traffic increased from 9.3 to 14.1 percent over HTTP. Fixed caps like the one imposed by Comcast will not work in the long run as today’s bandwidth hog becomes tomorrow’s normal user. 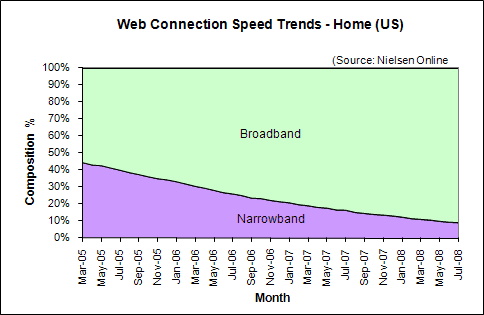 In July 2008, broadband penetration among active Internet users in US homes grew by 0.27 percentage points to 90.76%, up from 90.49% in June. This increase of 0.27 points is below the average increase in broadband of 0.62 points per month over the last six months (see Figure 5). 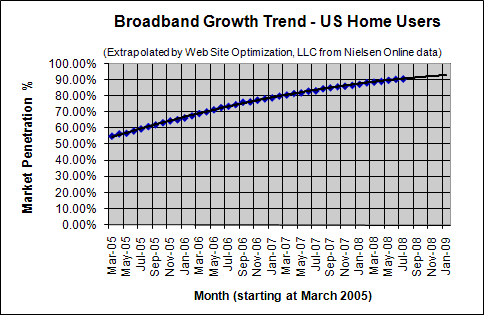 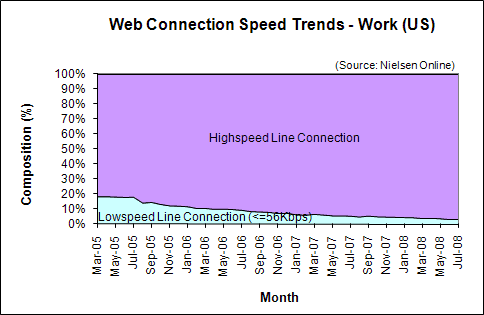 Burke, M. 2008. “Ellacoya Data Shows Web Traffic Overtakes Peer-to-Peer (P2P) as Largest Percentage of Bandwidth on the Network.”
June 18, 2007. Ellacoya Networks estimated that YouTube accounts for 20% of all HTTP traffic and nearly 10% of all traffic on the Internet.
Cauley, L. 2007. “Martin wants broadband across USA,”
USA Today, August 20, 2008. The US cannot afford to not offer broadband across the US, said FCC Chairman Kevin Martin. Martin proposes to use a chunk of wireless spectrum to spread broadband to rural areas, where only 38% of households subscribe to broadband. The US ranks 15th in broadband speed worldwide, but pays about as much as the fastest country, Japan. Rhode Island ranked first among all US states in download speed, while Alaska and Puerto Rico ranked last in a state by state survey by the Communication Workers of America. See also Speedmatters.org for the original report.
Cho, K. 2008. “Observing Slow Crustal Movement
in Residential User Traffic.”
Explores the growth and type of Internet traffic worldwide and in Japan. Found that Internet traffic is growing from
22 to 68 percent a year, with downloads now dominating uploads due to the shift from p2p to videos. From 2005 (the start of YouTube) to 2008, traffic over 100MB/day upload in HTTP has increased from 9.32 to 14.06 percent. CAIDA, the Cooperative Association for Internet Data Analysis, August 16, 2008.
Cisco. 2008. “Approaching the Zettabyte Era.”
Internet video is now approximately one-quarter of all consumer Internet traffic, not including the amount of video exchanged through P2P file sharing. Internet video was 22 percent at the end of 2007, and will reach 32 percent by the end of this year. The sum of all forms of video (TV, VoD, Internet, and P2P) will account for close to 90 percent of consumer traffic by 2012. Internet video alone will account for nearly 50 percent of all consumer Internet traffic in 2012. Annual global IP Traffic will exceed half a zettabyte in four years. A zettabyte is 1,000 exabytes or 1000 to a factor of 7 (on quintillion bytes). An exabyte is 1,000 petabytes, which is 1000 terabytes, which is 1000 gigabytes, which is 1000 megabytes. Global IP traffic will nearly double every two years through 2012. Cisco, June 16, 2008.
Gill, P. et al. 2007. “YouTube Traffic Characterization: A View From the Edge.”
In IMC 2007 (San Diego: October 24-26, 2007), 15-28. YouTube accounts for over 60% of videos watched on the Internet.
Horrigan, J. 2008. “Home Broadband 2008: Adoption Stalls for low-income Americans even as many broadband users opt for premium services that give them more speed,”
PEW Internet, July 2, 2008. As of April 2008, some 55% of all adult Americans now have a high-speed internet connection at home. Poorer Americans saw no growth in broadband adoption in the past year while at the same time nearly one-third of broadband users pay more to get faster connections. 62% of dial-up users say they are not interested in giving up their current connection for broadband.
Lipsman, A. 2008. “Number of Online Videos Viewed in the U.S. Jumps 13 Percent in March to 11.5 Billion.”
U.S. Internet users viewed 11.5 billion videos in March 2008, up 64 percent over March 2007. Google sites (YouTube and Google Video) accounted for a 38% share of all videos viewed, followed by Fox Interactive at 4.2 percent, Yahoo! sites at 2.9 percent, Viacom at 2.2 percent, and Microsoft sites at 2.1 percent. The average online viewer watched 238 minutes of video a month, with the average video duration at 2.8 minutes. comScore, May 12, 2008.
Nielsen Online
Provided the US broadband penetration data for active Internet users for the Bandwidth Report.
Stelter, B. 2008. “Comcast to Place a Cap on Internet Downloads.”
Comcast will put a 250 Gigabyte-per-month cap on residential broadband subscribers. “A Comcast spokeswoman, Jennifer Khoury, said 250 gigabytes was about 100 times the typical usage; the average customer uses two to three gigabytes a month. Less than 1 percent of customers exceed the cap, she said.” New York Times, August 29, 2008.