Broadband subscribers in the UK experience an average download speed of 3.6Mbps, according to a recent survey by Ofcom (Office of Communications 2009). Among subscribers to “up to 8Mbps” broadband, UK subscribers experienced an average actual download speed of 3.6Mbps, or 45% of the headline speed. Google has just the answer to disgruntled broadband subscribers, launching a new M-Lab service to measure user connections. Meanwhile in the US, broadband penetration increased to 92.8% among active Internet users.

The initial Ofcom survey results revealed that subscribers to the most popular broadband package in the UK (up to 8Mbps service) experience only 45% of the advertised speed. Despite the slower actual download speeds, 83% of consumers say that they are satisfied with their broadband service. Over 25% of consumers claim that the speeds they receive are not what they expected when they signed up to their broadband service.

While 93% of subscribers claim that they are satisfied with their web browing experience over their broadband connection, satisfaction scores are significantly lower for other types of Internet use. About 77% of audio listeners are satisfied and 60% of those who watch or download full feature films are satisfied. Such long video files require higher broadband speeds than 3.6Mbps to avoid jitter and other video degradation.

Over 78 percent of broadband subscribers in the UK use DSL (78.6%), while the US relies on cable for the majority of their broadband lines (55.7%). Both DSL and Cable offer lower maximum throughput speed than fiber lines. Countries with a high proportion of fiber lines, such as Japan (45%), Korea (39%), and China (23.1%) enjoy higher average broadband speeds. Japan leads all countries surveyed with broadband speeds ranging from 63 Mbps to 93.7Mbps, some 17.5 to 26 times the UK rate. 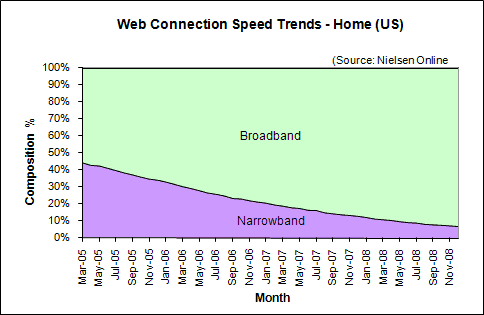 In December 2008, broadband penetration among active Internet users in US homes grew by 0.41 percentage points to 92.83%, up from 92.42% in November. This increase of 0.41 points is equal to the average increase in broadband of 0.41 points per month over the last six months (see Figure 2). Broadband growth continues to slow down as penetration reaches saturation, at least among active Internet users. 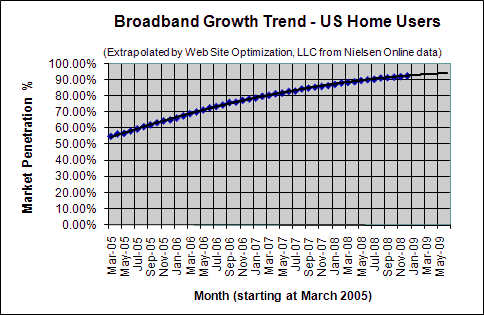 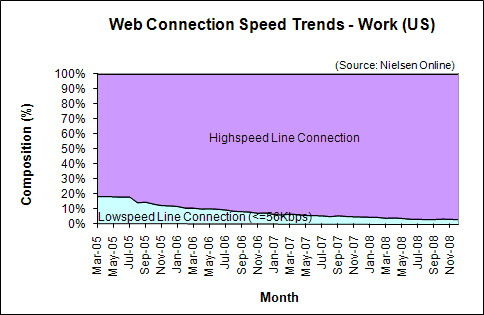