President-elect Obama is calling for a massive $850 billion or more economic stimulus package to jump start the US economy and rebuild neglected infrastructure. As part of this plan the Obama administration has pledged to deploy next-generation broadband to every community in America. What the new administration has not offered is more specifics on their plan to achieve broadband for all. The Free Press has put forth a $44 billion plan to achieve universal broadband availability for the United States.

According to change.gov, the Obama administration pledges to:

“Deploy next-generation broadband: Barack Obama and Joe Biden believe we can get broadband to every community in America through a combination of reform of the Universal Service Fund, better use of the nation’s wireless spectrum, promotion of next-generation facilities, technologies and applications, and new tax and loan incentives.”

Using a series of coordinated tax credits, incentives, grants, and appropriations the Free Press plan urges the new administration to “future proof” the new broadband infrastructure. They cite 5 Mbps as a bare minimum speed to deploy video and 100Mbps speeds to future-proof the network for next-generation applications. Some of the programs that the Free Press recommends include:

To future-proof our network we’ll need to radically change the makeup of our broadband infrastructure. The only current technology that will support symmetric 100 Mbps speeds is fiber. The US is well behind leading countries in fiber penetration, which reduces our average download speed. The median download speed of the United States is from 2.3 Mbps to 8.9Mbps, compared to that of Japan at 63 Mbps to 93.7 Mbps, some 10 to 27 times faster. Estimates range from as low as 3% of all broadband connections in the US are on fiber to as high as 4% on fiber (see below). In contrast, leading countries have from 23.1% to 45% of broadband subscribers due to fiber. Japan (45%), Korea (39%), and China (23.1%) have the largest share of broadband subscribers on fiber, some 5 to 15 times more fiber subscribers per population than the US. The Free Press study found China with 23.1% of broadband connections due to fiber, nearly 6 times the US rate of 4% (see Figure 1). 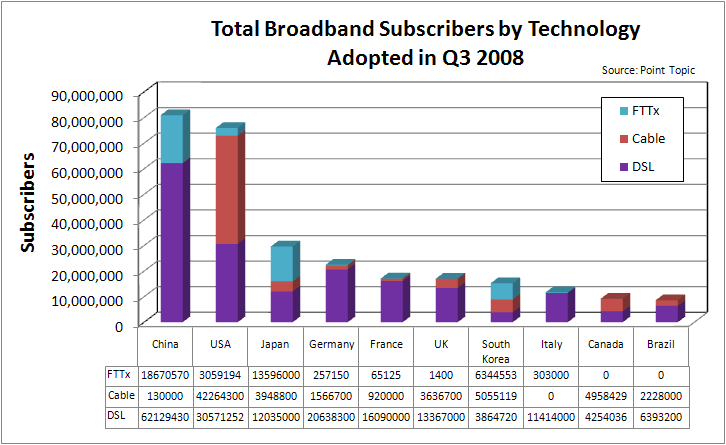 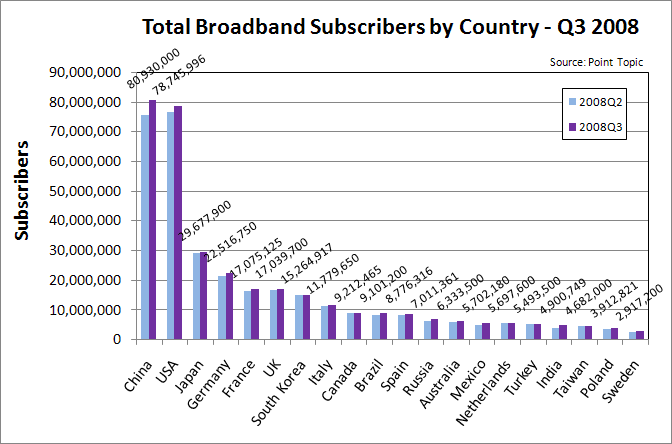 This “fiber deficit” is limiting the maximum speeds that US broadband subscribers can realize. In order to improve the average speed of US broadband, the US needs to deploy higher speed technologies such as fiber, rather than make cable or DSL more universally available. China, Japan, and Korea have a speed advantage of from 10 to nearly 30 times over the US due mainly to our reliance on cable broadband connections.

US Falls to 20th in Broadband Penetration By Population 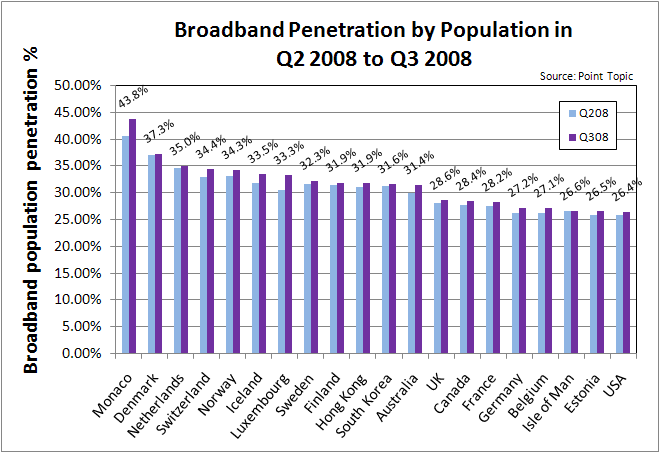 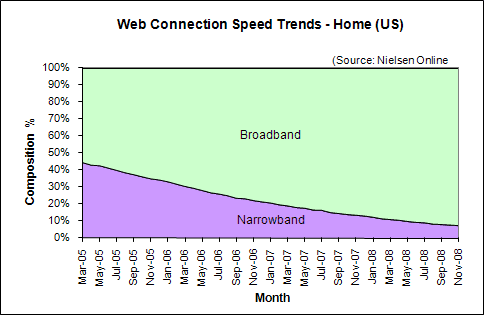 In November 2008, broadband penetration among active Internet users in US homes grew by 0.34 percentage points to 92.42%, up from 92.08% in September. This increase of 0.34 points is less than the average increase in broadband of 0.47 points per month over the last six months (see Figure 6). Broadband growth appears to be slowing down in the past few months as penetration reaches saturation, at least among active Internet users. 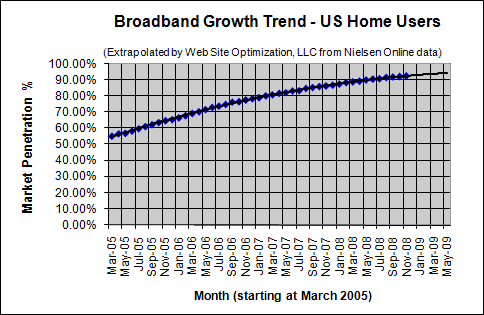 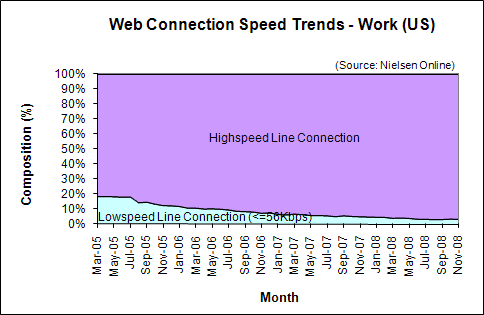 Down Payment on our Digital Future: Stimulus Policies for the 21st Century Economy
This document presents a $44 billion stimulus plan to revamp the United State’s broadband infrastructure. “Just as President Eisenhower’s economic policies brought Americans a national transportation system in the 1950s, President Obama’s can connect Americans to a communications network fast becoming the foundation of the 21st-century economy.” S. Derek Turner, Free Press, Dec. 2008.
Nielsen Online
Provided the US broadband penetration data for active Internet users for the Bandwidth Report.
Obama’s broadband roadmap
This story from the Huffington Post cites the Brookings Institute study that found that for every one-digit increase in the U.S. per-capita broadband penetration rate an additional 300,000 American jobs would be created. Reclaim the Media, December 10, 2008.
Point Topic
Provided the worldwide broadband data for the top 20 countries for the Bandwidth Report.
UK to pass Canada in Broadband Penetration in 2008
This October 2008 Bandwidth Report shows the US at 3% for fiber broadband connections, from the OECD.
US Drops to 19th in Broadband Penetration Worldwide
The September 2008 Bandwidth Report has the Q2 2008 data from Point Topic for comparison.
US Needs Broadband Czar Says FCC
This June 2008 Bandwidth Report shows the order of magnitude difference in broadband speeds between Japan and the US. The U.S. is at 8.9Mbps while Japan’s average download speed 93.7Mbps, more than 10 times faster.