Since the end of 2009, the US has improved its broadband speed rankings from 22nd to 16th worldwide. From Q4 2009 to Q2 2010, the average broadband speed in the US grew from 3.8Mbps to 4.6Mbps, according to an Akamai broadband survey. Delaware enjoys the fastest connections in the US, and California dominates the top US cities for fast broadband. If you want fast Internet connections, don’t go to Mayotte, Wallis and Futuna, or Cuba. 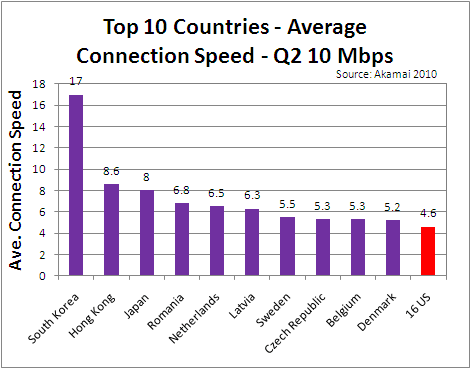 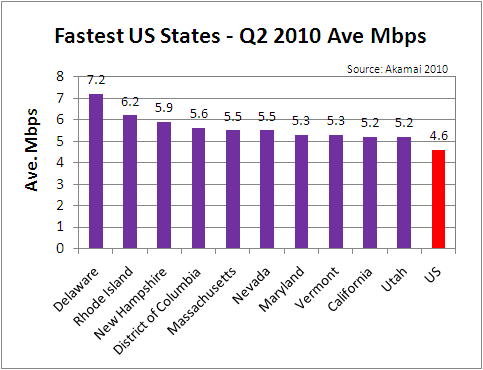 Unlike our previous worldwide broadband survey this month’s survey filtered out college towns and cities with less than 50,000 unique IP addresses. Once again California dominated the top 10 spots with 7 California cities having the fastest average broadband speeds. Monterey Park, CA tops the list with a 6.9Mbps average connection speed, followed by Riverside, CA at 6.8Mbps, Union, NJ at 6.4Mbps, Oakland, CA at 6.4Mbps, and Fairfield, CA at 6.3Mbps. 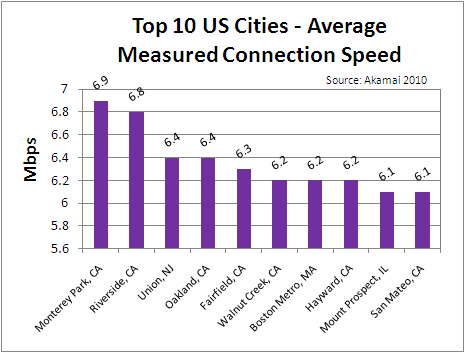 Slowest Countries with the most 256Kbps Connections 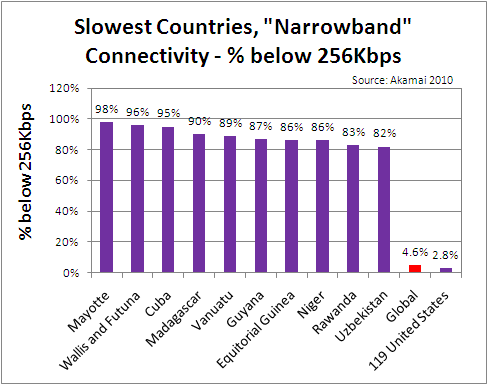 Slowest US States with the most 256Kbps Connections

Nine out of the ten slowest US states saw a decline in narrowband connections, only North Dakota showed a slight increase over the last quarter (see Figure 5). Alaska led all states in narrowband lines with 7.7% of users on dialup, followed by the District of Columbia at 6.5%, Missouri at 5.7%, Iowa at 5.5%, and Georgia at 4.5% narrowband adoption. Note that the District of Columnbia made both the slowest and fastest top 10 lists. 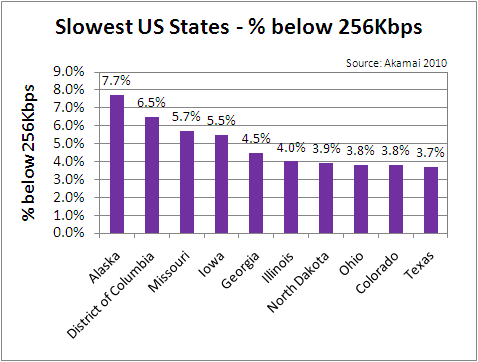 In light of the increased use of hand-held mobile devices, Akamai is now tracking mobile broadband usage. “During the second quarter of 2010, average measured connection speeds on
mobile network providers around the world ranged from 6.1 Mbps, down to 115 Kbps – both were observed
on mobile providers in Slovakia. Average peak connection speeds on mobile providers around the world ranged
from over 20 Mbps down to just over 700 Kbps.”

Akamai
The data for this month’s Bandwidth Report was provided by Akamai, from their “The State of the Internet,” Volume 3, Number 2 Q2 2010 report.
US Drops to 22nd in Broadband Speed Worldwide
The last broadband speed survey results from Akamai. The average connection speed in the United States fell from 18th to 22nd place worldwide in the last quarter of 2009. The fastest broadband cities in the US are college towns. April 2010.