Most books on human-computer interaction (HCI) and usability give recommendations based on empirical research, guidelines fit to observed user behavior, and cognitive models after the fact. Peter Pirolli, the father of information foraging theory, has written a new book that models and predicts what users will do before they navigate a website. Using mathematical models of human behavior, Pirolli lays out the foundation of information foraging theory, a relatively new field based in part on optimal foraging theory in animals (Stephens & Krebs 1986). The result is a seminal work in Oxford University Press’ series on Human-Computer Interaction. We were fortunate to review a proof of Pirolli’s new book Information Foraging Theory: Adaptive Interaction with Information, due out April 2007. 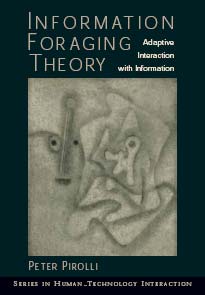 The book builds up Pirolli and Card’s current thinking on Information Foraging Theory, chapter by chapter (Pirolli & Card 1999). The first eight chapters proceed from simple foraging models to more complex and realistic models of informating foraging on the Web. Each chapter uses mathematical forumlas to model human behavior with a brief discussion along with illustrative examples and graphs to represent key concepts. By necessity Pirolli has created a new field, borrowing from economic decision-making, Bayesian mathematics, and rational choice under uncertain and limited conditions. Overall the book is technical and more of a college textbook than usability handbook in the tradition of Nielsen and Spool. You may need to brush up on your advanced math skills before tackling this book. However, the last three chapters on cooperative foraging, practical guidelines, and future research and applications are well worth the price of admission.Like animals foraging for food with time and energy constraints, humans forage for information looking for answers.
The problem is that we are awash in a glut of information, which is growing at an alarming rate. Humans have naturally adopted adaptive strategies to optimize their intake of useful information per unit cost. Information foraging theory aims to model and predict our evolutionary behavior in adapting to an increasingly complex world. The book both models our behavior in mathematical formulae and validates its predictions empirically to refine the model. Armed with this knowledge, designers can make informed decisions on web designs before they make a heavy investment in implementation.

The book answers following questions that have vexed web developers for over a decade.

The Father of Information Foraging Theory

Peter Pirolli is a Research Fellow in the User Interface Research Area at PARC. He received his B.Sc. in Psychology and Anthropology from Trent University, Canada. He earned his M.S. and Ph.D. in Cognitive Psychology from Carnegie Mellon University. He became a tenured Professor in the School of Education at the University of California, Berkeley, where he was also Associate Director of the Cognitive Science Program. He is an elected Fellow of the Computer Human Interaction Academy, a member of the American Association for the Advancement of Science, the Association for Psychological Science, and the National Academy of Education. He joined PARC in 1992 where he is engaged in studies of augmented social cognition, human-information interaction, and information foraging theory.

After he joined the Palo Alto Research Center (PARC) in 1992, Pirolli became involved in problems of intelligent information access. A group of researchers including Stuard Card, Dan Russell, Mark Stefik, and John van Gigch were doing studies of analysts and MBA students doing information-intensive searches. Pirolli realized that a new approach would be needed to analyze and model these free-wheeling tasks. Building on the work of John Anderson (1990), who first studied the mind-environment link and the work of E. A. Smith (1987) whose behavioral ecology holds that people’s strategies can be predicted in part by scrutinizing their environment, Pirolli wondered if a similar approach could be applied to the analysis of the information environment and to how it shapes our seeking behavior. Researching the topic he found optimal foraging theory (Stephens and Krebs 1986) and literally had an “ah-ha” experience one night while brainstorming the idea with his fiancee, Jacqui LeBlanc. Pirolli realized that optimal foraging theory and the core mathematics behind it could be applied to how humans search for information.

Pirolli recounts his second “ah-ha” moment in the Preface where information foraging was used to bring “messy data into crystal clear focus.” When analyzing log file data from a Scatter/Gather study detailed in Chapter 6, simple analysis of the user interaction logs showed a seemingly nonsensical allocation of their time and navigational choices. Once he applied optimal foraging methods, the data fell neatly into place (Figure 7).

What Is Information Foraging?

Unlike cognitive engineering models of the early 1990s where tasks were analyzed in well-defined domains and user interfaces, people seeking information are largely shaped by the structure of the content, that is, their information environment. People routinely sift massive volumes of information under deadline pressure to make complex search decisions under uncertain conditions. We are constantly evaluating the expected costs and benefits of our actions in this largely probabilistic textured information environment (Brunswik 1952) to maximize our gain of valuable information. Pirolli calls this behavior information foraging.

Information foraging strategies optimize the use of our time and effort to gain valuable information. We satisfice, getting a good enough outcome under uncertain and limited conditions (bounded rationality). As in the real world where animals forage for food, the online world of the Web is a patchy environment with information arranged into clumps. Patches of useful information reside in different websites, it is our job as “informavores” to seek out the richest patches and extract useful information. As we forage for more information, it becomes harder to find additional useful information as we pick off the “low hanging fruit.” Diminishing returns cause us to “feed” at a patch until our rate of gain of useful information falls below the perceived average. Once we think the grass is greener in another “patch,” we switch pages, websites, or search criteria, seeking out more fruitful patches of information. Pirolli’s mathematics describe the environment and predicts with some accuracy our behavior in the Web’s patchy environment.

Here are the chapter titles of the book: