Google’s mod_pagespeed is an open source Apache module that automatically applies best practice performance rules to web pages and their associated objects. Mod_pagespeed has more than 40 available optimization filters, including image optimization, CSS and JavaScript concatenation, minification, caching, sharding, deferring JavaScript and more. While mod_pagespeed won’t solve all performance problems, it will trim the fat from unminified text files and graphics, and reduce HTTP requests. This article tests the effect of mod_pagespeed on an example site.

In our last speed tweak we upgraded the hosting of a test site. The first byte time was reduced significantly for both DSL and cable, and cable load time improved by 34.3%. However, DSL load times remained unchanged after the hosting upgrade. 20 second load times are unacceptable at DSL speeds. 3.4MB and 76 requests is clearly too large and complex a page to load fast. Clearly the page size and complexity need to be reduced.

To reduce the footprint of our test web page, we installed mod_pagespeed on the new server. The results are shown in Figures 1 and 2. 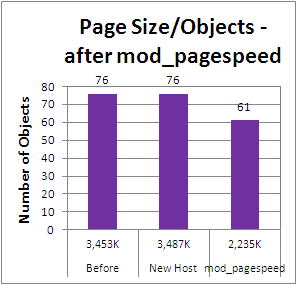 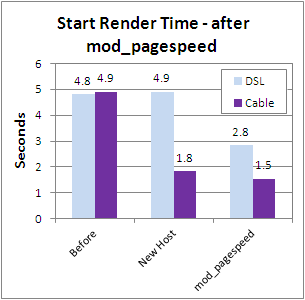 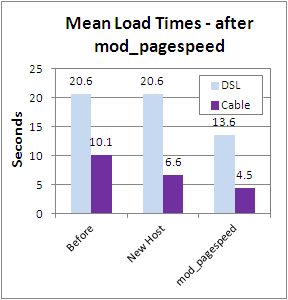 Automatically Speed Up Your Site with mod_pagespeed for Apache
mod_pagespeed is an open-source Apache module that automatically speeds up web sites. Through a number of filters, mod_pagespeed trims the fat off your HTML, CSS, JavaScript and images, reduces HTTP requests, and improves caching. In this article we introduce mod_pagespeed and summarize the available filters.
Use a Website Accelerator
Automated website acceleration products can speed up your site without developer intervention. We test the effectiveness of Radware’s Fastview appliance on a test site and find significant improvements in speed.