With the average web page made up of more than 50 objects (Krishnamurthy and Wills 2006), object overhead now dominates the latency of most web pages (Yuan 2005). Following the recommendation of the HTTP 1.1 specification, browsers typically default to two simultaneous threads per hostname. As the number of HTTP requests required by a web page increase from 3 to 23, the actual download time of objects as a percentage of total page download time drops from 50% to only 14% (see Figure 1). 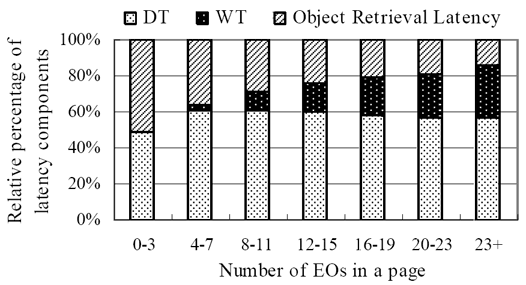 As the number of objects per page increases above four, the overhead of waiting for available threads and describing the object chunks being sent dominates the total page load time (80% to 86% at 20 and 23+ objects respectively), compared to the actual object retrieval time due to file size. The description time plus the wait time caused by limited parallelism contribute from 50% to 86% of total page retrieval delay. Chi and Li also found that once the number of embedded objects exceeds ten, the description (or definition) time increases to over 80% of the total object retrieval time (Chi and Li 2002). Note that you can significantly reduce the overhead of multiple objects (for more than 12 objects per page) by turning on keep-alive and spreading the requests over multiple servers (Hopkins 2007).

The HTTP 1.1 specification, circa 1999, recommends that browsers and servers limit parallel requests to the same hostname to two (Fielding et al. 1999). Written before broadband was widely adopted, this specification was designed for narrowband connections. Most browsers comply with the multithreading recommendation of the specification, although downgrading to HTTP 1.0 boosts parallel downloads to four. So most web browsers are effectively throttled by this limit on parallel downloads if the objects in the web page they download are hosted on one hostname. There are two ways around this limitation:

You can, of course, set up multiple object or image-hosting servers to boost the number of parallel downloads. For example:

Each of these subdomains does not have to be on a separate server, however.

A more elegant solution is to set up multiple subdomains that point to the same server. This technique fools browsers into believing objects are being served from different hostnames, thereby allowing more than two-threads per server. For example you can set:

within your DNS zone record. Now you can reference different objects using different hostnames, even though they are on the same server! For example:

All of these URLs point back to:

Two studies conducted by Yahoo! and Gomez demonstrate how increasing the number of hostnames can minimize parallel download delays. Steve Souders and Tenni Theurer of Yahoo! reported on a test in their Performance UI blog (Theurer and Souders 2007). Varying the number of hostnames, as well as object size, the Yahoo! engineers found that two hostnames gave the fastest response times for larger file sizes (see Figure 2). Theurer provided WSO with an updated figure showing the trends for response times versus the number of aliases and image file size. 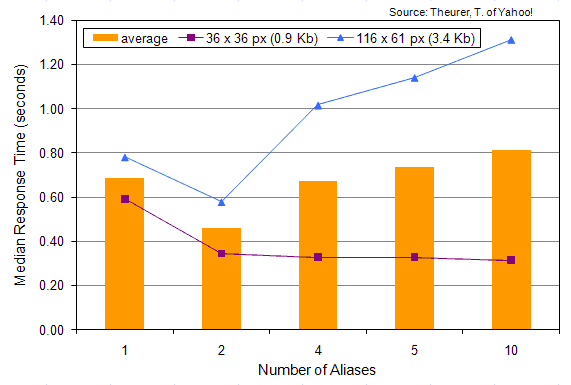 Figure 3: Total page load time versus number of connections (2 and 6) (used with permission)

With the average web page growing past 50 external objects, minimizing object overhead is critical to optimize web performance. You can minimize the number of objects by using CSS sprites, combining objects to minimize HTTP requests, and suturing CSS or JavaScript files at the server. With today’s faster broadband connections, boosting parallel downloads can realize up to a 40% improvement in web page latency. You can use two or three hostnames to serve objects from the same server to fool browsers into multithreading more objects.

Breen, R., “Circumventing browser connection limits for fun and profit,”
Ajax Performance, Dec. 18, 2006, http://www.ajaxperformance.com/?p=33 (Dec. 24, 2007). Shows the benefits of using more than 2 connections per hostname when optimizing Ajax applications. Realized a 40% speedup in download times by dynamically assigning different subdomains to objects programmatically.
Chi, C., and X. Li, “Understanding the Object Retrieval Dependence of Web Page Access,”
Proceedings of the 10th IEEE Int’l Symp. On Modeling, Analysis, & Simulation of Computer & Telecommunications Systems (MASCOTS’02). The CT (connection time) makes up from 6 to 17% of web object retrieval latency (send request to first byte received).
Fielding, R., et al., “Hypertext Transfer Protocol — HTTP/1.1,”
World Wide Web Consortium, June 1999, http://www.w3.org/Protocols/rfc2616/rfc2616.html (Dec. 24, 2007). Specifies the HTTP 1.1 protocol, which defines how web servers interact with web browsers. The specification includes persistent connections to boost performance. The specification also recommends a maximum of 2 connections per hostname, which most browsers support.
Hopkins, A., “Optimizing Page Load Time,”
Shows some simulations of multiple hostnames, object size, and latency on effective download speed.
King, A., “Combine Images to Save HTTP requests,”
Website Optimization, LLC, Speed Tweak of the Week, May 31, 2006. Learn how to combine adjacent images and imagemap to save HTTP requests. This speed optimization technique saves round trips to the server for faster load times.
King, A., “CSS Sprites: How Yahoo.com and AOL.com Save HTTP Requests,”
Website Optimization, LLC, Speed Tweak of the Week, Sept. 26, 2007. Learn how top sites use CSS sprites to improve website performance. Yahoo! and AOL.com use CSS sprites to save HTTP requests in their sites.
King, A., “Minimize HTTP Requests,”
Website Optimization, LLC, Speed Tweak of the Week, Dec. 13, 2003. Combine CSS or JavaScript files to save HTTP requests before uploading to the server, to avoid the same-domain connection limit.
Krishnamurthy, B. and C. Wills, “Cat and Mouse: Content Delivery Tradeoffs in Web Access,”
WWW 2006, May 23-26, 2006, Edinburgh, Scotland. Using an instrumented Firefox browser to test the top 100 Alexa pages in 13 categories the researchers found that extraneous content exists on the majority of popular pages, and that blocking this content buys a 25-30% reduction in objects downloaded and bytes, with a 33% decrease in page latency. Popular sites averaged 52 object per page, 8.1 of which were ads, served from 5.7 servers.
Theurer, T., and S. Souders, “Performance Research, Part 4: Maximizing Parallel Downloads in the Carpool Lane,”
Yahoo! User Interface Blog, April 11, 2007, http://yuiblog.com/blog/2007/04/11/performance-research-part-4/ (Dec. 24, 2007). Shows how for larger files 2 is the optimal number of aliases to enable 4 parallel downloads of external objects.
Yuan, J., Chi, C.H., and Q. Sun, “A More Precise Model for Web Retrieval,”
WWW 2005, May 10-14, 2005, Chiba, Japan.. The researchers found that the Definition Time (DT) and Waiting Time (WT) of objects have a significant impact on the total latency of web object retrieval, yet they are largely ignored in object-level studies. The DT and WT composed from 50 to 85% of total wait time, depending on the number of objects in a page. Above four objects per page, “object overhead” dominates web page latency.