The first Velocity Web Performance and Operations conference held in New York City ran from October 14-16, 2013. In its sixth year, Velocity is a conference devoted to testing and speeding up websites. Co-founded by Steve Souders, of YSlow and Page Speed fame and now with Google, attending Velocity is a great way to stay up to date on the latest performance trends, include mobile performance. This article gives some highlights from the conference.

Mobile web site performance is so important it has its own “track” with mobile-specific talks and tutorials. With mobile share increasing (30-40% of visitors in some cases) many of the talks covered both desktop and mobile performance issues. One thing is clear, mobile sites are getting fatter and slower. In a 2013 test, 72% of mobile websites were about the same size as desktop, 22% were smaller, and only 6% were much smaller (Responsive Responsive Design, see Figure 1). 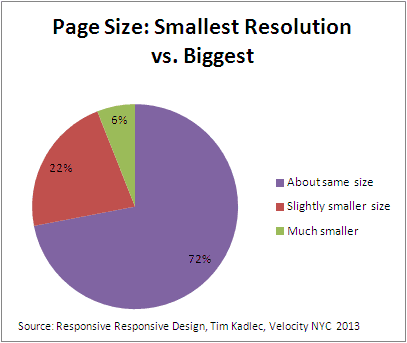 71% of users expect mobile sites to be as fast or faster than desktop sites. Problem is, mobile sites are getting bigger. In March 2012 the average mobile site was 829K, in March 2013 it was 1031K. Yet to be usable you need an above the fold payload of 65-100K to load in under 10seconds on a slow cellular connection.

Problems with Hiding Elements in Mobile

The problem is that there is no one-size fits all method to hide or down-resolution images and multimedia in CSS. Using display:none; doesn’t show elements, but browsers download them anyway (at least with display:none; assigned to the element itself). Visibility:none; works the same way. The trick is to apply the visibility/display to the parent element, then the resource will not load on mobile devices. So even though a mobile site looks smaller, it actually loads the same content as the desktop site if you rely on display:none to hide your full-sizes images.

Regular foreground images are more problematic. Currently there is no way to display alternative images without JavaScript. A few possibilities are picture, srcset, and LQIP:

Tim Kadlec went on to say that 66% of page weight in mobile sites are images. Some responsive image optimization strategies:

Most Entertaining Talk at Velocity

Jake Archibald (Google) gave the most entertaining talks. “What Your Browser Does When You Aren’t Looking”
showed code examples loading resources with an audience quiz with live speedometer feedback on what actually happened in different browsers.

Steve Souders gave a good talk on “prebrowsing” a term he coined and has the domain for. Studies have shown that preloading / lookahead techniques speed up browsing by 20%.

There was much emphasis on mobile website testing (see some urls in the further reading section below). Andy Davies and Sergey Chrnyshev of showslow fame gave a hands-on web performance workshop showing various mobile performance testing techniques and tools.

Async and defer atrribute for scripts, combine everything (JS) into one file and use ASYNC attribute. Move print.css to the end of the body to avoid blocking in IE<9 (against specification, people get content faster in IE8). Web fonts block rendering (we’ve also found that external web fonts can cause significant slowdowns, use built-in fonts instead). For JavaScript libraries, “go vanilla” to avoid size/overhead of JavaScript libraries, especially on mobile devices which can have limited bandwidth and memory.

Overall it was a great performance conference. that was well-attended You can see the trend moving towards mobile performance and devices as each subsequent Velocity conference has more talks on mobile. The mobile testing tools and standards are starting to catch up, but they have a ways to go to match the level of tools we have for desktop performance testing.