Having search engine visibility is critical for website success. Search visibility is due to many ranking factors, including speed. Until recently the effects of website performance on rankings have been poorly understood. This article summarizes an empirical study of web site load times on search rankings. The study found that website crawl time and its variability correlates with search ranking position.

There are over 200 “signals” that determine where a web page ranks in Google (Dean 2015). Page relevance, backlinks, social signals, fresh content, speed, and now HTTPS are some of the ranking factors that are often cited by Google and SEO experts. SEO is often divided up into on-site factors (keywords, relevant content, fresh content etc.) and off-site (backlinks, social activity, etc.). One on-site aspect that can be largely controlled by site owners is web site performance. However, the role of speed in search engine rankings has not been studied as well as other ranking factors.

Web site speed has been shown to improve many success metrics. Conversion rates (Akamai 2012, Tagman 2012), bounce rates (King 2014), and revenue (Everts 2012) have all shown improvement with faster web sites. Google’s own study showed the importance of speed in search results, finding that increasing latency by 100ms and 400 ms reduced daily searches by 0.2% to 0.6% respectively (Google 2009).

Google started factoring in web page speed into search results in 2010 (Google 2010). Google also applied for a patent later that year that was granted in February of 2014 (Jain & Ramachandran 2014). Google has produced tools and tips to help webmasters speed up the Web including Pagespeed tools, software modules and a mini-site devoted to web performance (Google, Make the Web Faster). Google wrote that web site speed:

Three Polish researchers from Poznan University of Technology set out to confirm Google’s assertions (Marszalkowski et. al., 2014). The researchers tested the influence of load time factors on search ranking results. In an empirical study of 40 keyphrases, load times were measured for the first 30 results for each phrase. They found that load time factor plays a role in the Google ranking algorithm, although its weight is not high. Google appears to use crawl time, i.e., the time spent downloading a page by the Google robot, in ranking web pages (Figure 1). Page load time appeared to not correlate with page ranking. 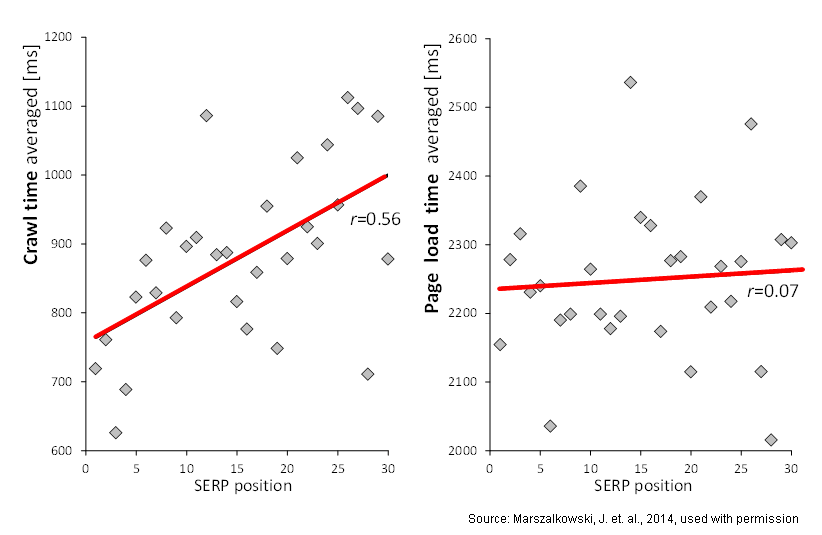 A second study using 10 tailored web pages with different crawl times confirmed that load time is not only correlated with web page ranking position, but effectively determines its position.We asked one of the researchers about the results of their study:

“Yes, we indeed found that crawl time and its variability are correlated with SERP position, while page load time seems to be uncorrelated. More so, as correlation does not imply causation we performed one more experiment with artificial web pages (described in section 5. of the paper), where we tailored 10 web pages with different crawl times (script was performing sleep(x))…. And after some time the tailored web pages ordered in SERP with positions quite strongly correlating with crawl time (check section 5 and table 2 of the paper).

There was strong and significant correlation between SERP and crawl time. For crawl time we understand it to be the time necessary to get the sole HTML file of the web page, like a Google crawler measures. There was weak and insignificant correlation between SERP and page load time. As far as page load time we understand it is the time a browser needs to download the whole page with all of its scripts and images, measured in the browser. Thus we think that the page load time is not the factor, rather the crawl time is.” – Jakub Marszalkowski.

They compared page load time with Google’s claims that crawl times above 1.5 seconds were slow. The 20th percentile of all crawl times for all measured pages was 1.375 seconds. This value was just under the 1.5 second metric claimed by Google, but probably lower as it was 2 years old at the time of their writing. They found no correlation between SERP position and page load time (see Figure 1).

The researchers then ran an experiment to verify their results. They used artificially delayed web pages set to have response times from 0.15s to 3.45s with a step of 0.3s. After 13 months the search ranking results and load times were tabulated. They concluded that crawl time determined SERP position, with all other factors being equal.

In summary for Google:

The researchers found similar behavior for early versions of Bing and Yahoo!, but the results for later versions of these search algorithms were inconclusive.

Akamai 2012, “ROI Analysis Reveals That eBags Converts 15% More Buyers with Akamai Services“
A study by eBag.com found in an A/B test of Akamai service and their own servers a 15.33% improvement in ecommerce conversion rate as well improvements in other metrics.
Dean, B. Feb. 18, 2015, “Google’s 200 Ranking Factors: The Complete List“
Brian Dean lists more than 200 ranking factors that Google uses to rank web pages in search results. Some are proven, some are controversian, and some are “SEO nerd speculation.” Factor 20 and others list speed as a ranking factor. Feb. 18, 2015, Backlinko.com.
Everts, T, 2012 “4 awesome slides showing how page speed correlates to business metrics at Walmart.com?
Walmart found that every 1 second improvement in page speed increased conversion rates by 2 percent. For every 100 ms of improvement, they grew incremental revenue by up to 1%. Webperformancetoday.com.
Google, Make the Web Faster
Google’s speed mini-site with tools and techniques designed to help make your website faster.
Google Webmaster Central Blog, April 09, 2010. “Using site speed in web search ranking“
Google announces that site speed is a ranking factor in their search results. While site speed is a new ranking signal, it doesn’t carry as much weight as other factors such as pasge relevance. Less than 1% of search queries are affected by the new site speed signal, and the signal only applies to visitors searching in English on Google.com.
Hoffman, B., “How Website Speed Actually Impacts Search Ranking“
Moz.com, Aug. 1, 2013. To find out which speed metrics impact search rankings Matt Peters of Moz.com worked with Zoompf to study the issue. 2000 random search queries were studied. Page speed metrics were gathered and they found that only time-to-first-byte positively correlated with search rankings. Page load time did not, and page size actually inversely correlated with search rankings.
Jain, A., & Ramachandran S. “Using resource load times in ranking search results,”
Feb. 4, 2014 (applied Nov. 12, 2010). Google’s patent for using load times to rank search results. Shows how after receiving a search query from a user device, they create a first score. Then the algorithm accesses load time data for the resource, and adjusts the first score based on the load time data to generate a second score. USPTO patent number 8,645,362 assigned to Google Inc.
King, A. 2014, “Upgrade to a Faster Server: Results“
Upgrading to a faster server improved average page load times by 48% to 60% and bounce rates by up to 8.8%. WebsiteOptimization.com.
Marszalkowski, J., Marszalkowski, J. M., & M. Drozdowski, “Empirical Study of Load Time Factor in Search Engine Ranking,”
Journal of Web Engineering, Vol. 13, No. 1&2 (2014) 114-128. This research studied the influence of web page performance factors on search ranking results. Google was the primary target search engine, with Bing, and Yahoo! also studied. An empirical study of 40 keyphrases and load times measured for the first 30 results for each phrase found that load time factor plays a role in the Google ranking algorithm, although its weight is not high. Google appears to use crawl time, i.e., the time spent downloading a page by the Google robot, in ranking web pages. A second study confirmed that load time is not only correlated with web page ranking position, but effectively determines its position.
Tagman 2012, “Just One Second Delay In Page-Load Can Cause 7% Loss in Customer Conversions“
Tagman found that every second of page load time over 2 seconds decreased conversion rate by 6.7%.