Skip to content
Home » Upgrade to a Faster Server: Results

Last time we explored the effects of upgrading to a faster server on the home page of PhillyDentistry.com. We found a significant improvement in response times for the home page, over 60% faster in first paint times and nearly 30% faster in load times. This time we look deeper into the effects of the faster server on the performance and audience behavior for the entire web site.

The site was moved to the faster server on August 20, 2014. We tested the site five weeks before and after this move date. Note that page load times were more consistent after the move (blue [new server] vs. orange [old server] lines). The daily view shows clearly that the variability of the response times was reduced, which improves “attunability.” A monthly view shows the effects overall after the move (see Figure 2). 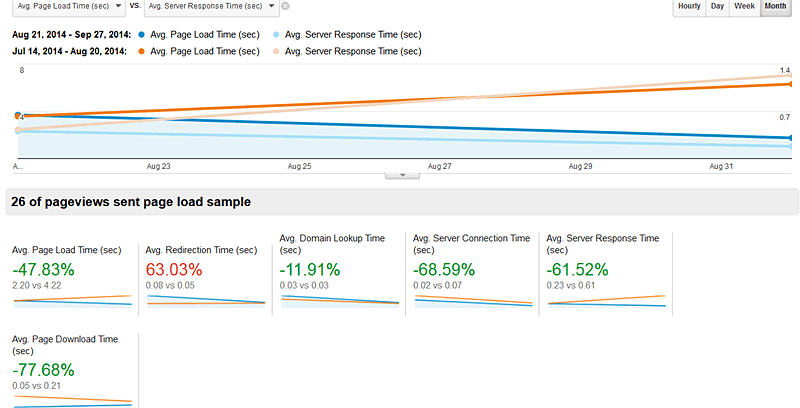 In addition to overal page speed averages, Google Analytics also provides browser-specific results. Firefox benefited the most from the move loading pages more than 66% faster, followed by Chrome at 47% and Internet Explorer at 22.8% faster (see Figure 3).

So the speed has definitely improved with the new server, but what about audience behavior? Most of the behavior metrics tested improved after the server upgrade. Overall the site became “stickier” with pages per session (1.23% more), average session duration (up 5.5%), and the percentage of new sessions (up 0.58%) all seeing improvement (see Figure 4).

Digging deeper into Google Analytics the in-page metrics show further improvement (see Figure 5). The average time on page increased by 26%, average page load time decreased by over 60%, and the bounce rate improve by 8.8%. Only the exit percentage degraded by 8%. 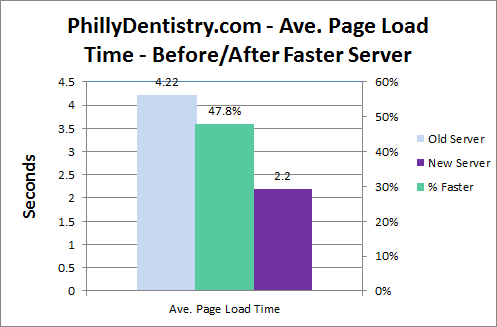 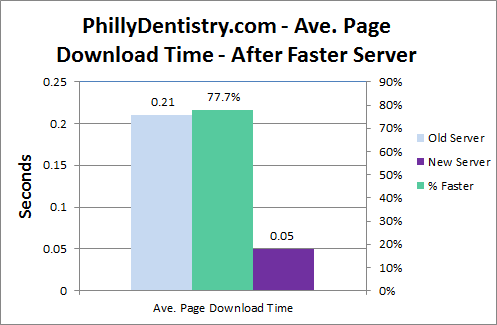 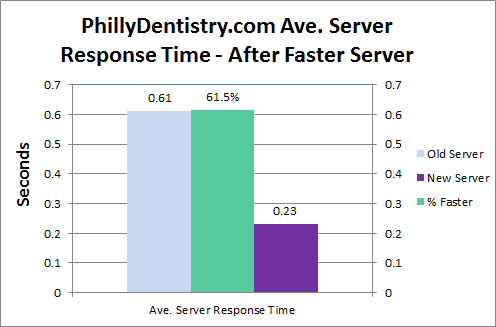 Phillydentistry.com
Dr. Ken Cirka’s website was moved to a faster server in late August. This article shows the overall results for the entire site for speed and audience behavior.
Upgrade to a Faster Server
Upgrading to a faster server can improve web page speed significantly. We found a 66% improvement for first paint time and 29% for load times for the Phillydentistry.com home page after the move.