Skip to content
Home » Upgrade to a Faster Server

By now, everyone knows the value of speed on the Web. Higher conversions, less frustration, more loyalty, and as of 2010 higher rankings on Google can all be had with a faster web site. You can, of course, optimize your content for more speed. But how much does the performance of your hosting effect the speed of your website? This article tests the effects of a new screamingly fast server on a client’s website.

We’ve already tested the effects of upgrading from a mass web host (such as Hostgater or Godaddy). Switching to a lightly loaded host improved first byte times by over 82% and variability by 7-fold.

Installing mod_pagespeed improved start render times by about 43%, and load times by 34% for DSL connections.

The servers used for each host were comparable in performance. But what about upgrading your server to a higher performance model, optimized for hosting a WordPress site for example? We’ve already found that upgrading the server’s hard drive to a solid state model improved performance from 35 to 50%.

What would happen if we pulled out the stops and moved a typical site from a normal shared host to a screamingly fast web host specifically designed for high performance?

The new server was also tweaked for performance with the following:

The Old Server Performance versus the New Faster Server

We asked an established client, Dr. Ken Cirka of PhillyDentistry.com (see Figure 1), if he wouldn’t mind trying his site on our new faster server service. He readily agreed. Dr. Cirka has had no complaints about the speed of his current site which was on a normal shared host, but we suggested that faster is better.

After moving his site to the faster server above, the difference was dramatic (see Figures 2 & 3). First paint times improved by nearly 66%, start render times improved by 57%, and load times improved by 29% on DSL. Google’s speed index, which Google no doubt uses when factoring into their search ranking equations, improved by over 46% on DSL after the move.

Cable results followed a similar trend, albeit at lower amplitudes (which is typical for this faster connection speed). First paint times improved by nearly 62%, start render by 13%, and load times by 23.6% on cable. TTFB improved slightly by 0.4% on Cable, with minimal change for DSL. 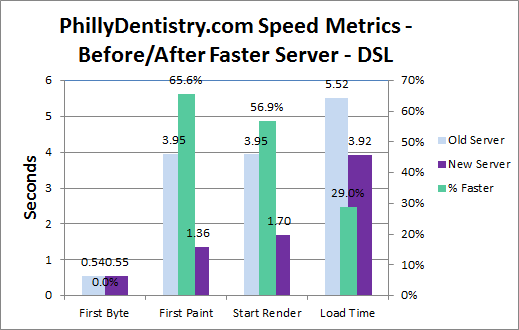 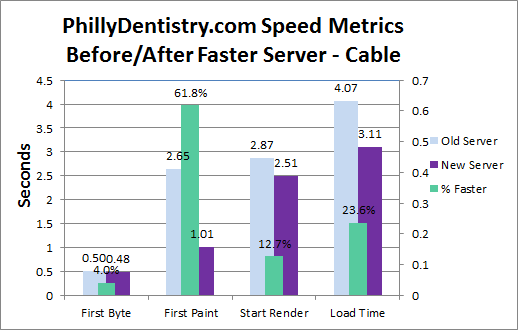 The Pagespeed grade improved from 65/100 to 85/100 after the move (see Figure 4). Note that there is still room for improvement in TTFB, caching, and CDN usage. TTFB improved for other objects by nearly a factor of 10 (see Figures 5 & 6), but did not improve much for the initial HTML object load. The only objects not cached were loaded from off-site, which cannot be cached locally without some additional programming. For the CDN, we intend to try adding a CDN to this site next and test the results. 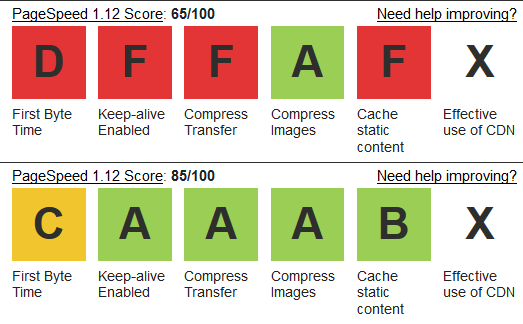 The waterfall charts that show how objects load in the page are shown in Figures 5 and 6. Figure 5 shows the waterfall before the server move, showing a nearly 4 second start render, slow TTFB for many objects (over 1 second!), and slow JQuery and Javascript file loading. Figure 6 shows a much improved start render time of 1.7S, much shorter TTFB for objects (nearly an order of magnitude faster), and some slow initial connection times. 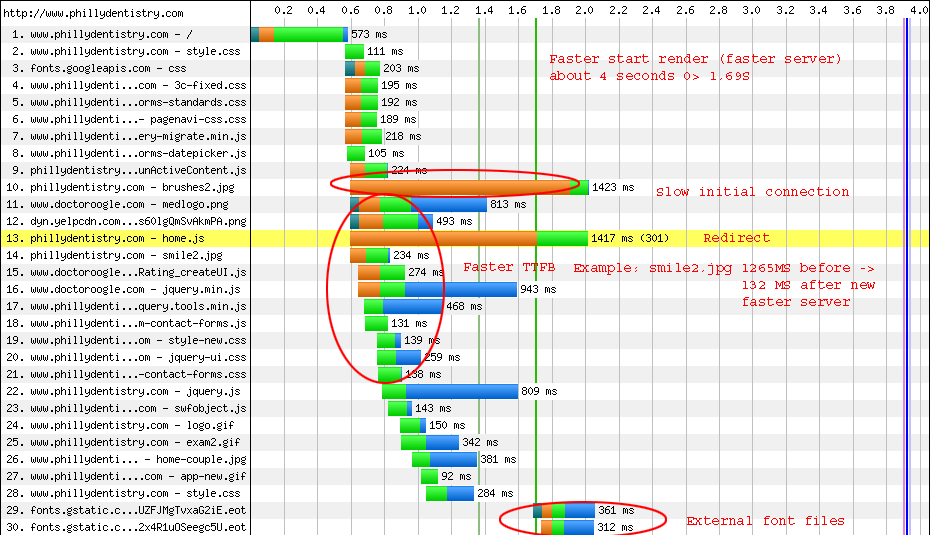 Perhaps most importantly for SEO, the speed index improved by more than 46% for DSL, and nearly 13% for cable on the new faster server (see Figure 7). Google factors in speed to their ranking calculations, probably using the speed index as one of their performance metrics. 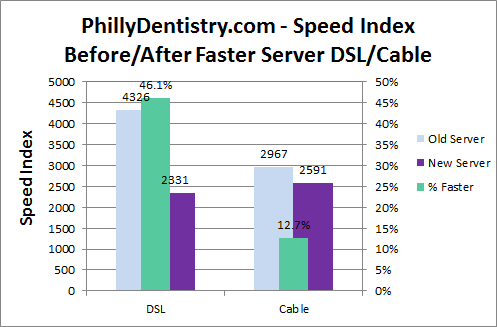 Moving a typical site to a high performance server made a significant improvement in speed. First paint times were 62% to 66% faster on the new server, start render times improved from 13% to 57% faster (Cable and DSL respectively), and load times improved from 24% to 29% faster. Speed index scores improved by 13% to 46% faster on cable and DSL connections respectively. It’ll be interesting to see the effect on conversion and bounce rates with the new server, and what effect a CDN will have on performance.

Avoid Mass Web Hosting
Found that moving from a shared mass web host to a lightly loaded shared host improved server response times by 82.1% and variability by about 7 fold.
Install mod_pagespeed
Installing mod_pagespeed can make significant improvements in web page performance. In our tests, web page start render times improved by 17% to 43% and load times improved by about one-third. However, while mod_pagespeed improved load times, it is no substitute for manual website optimization.
Solid-State Drive Web Server Test
We test a new server with solid-state drives and faster processors. Upgrading our dedicated server improved performance by 35% to 50%.