As part of the National Broadband Plan the FCC was tasked with providing more transparency in broadband information for consumers. In Part II of our Measuring Broadband America summary, the FCC tested web site performance measures versus broadband provider. They found that latency varies with broadband type (DSL, Cable, and Fiber), and that average web page download times changed little above 10-12 Mbps. Part I of this report showed the broadband performance of 13 different ISPs at different bandwidths.

Latency is the time it takes for a TCP packet of data to travel from one hop to another in a network, normally expressed in milliseconds (ms). Latency can be a major factor in web page download speed, especially at higher bandwidths. In the tests shown below, latency is defined as the round-trip time from the consumer’s home to the closest server used for the speed measurement within the provider’s network (see Figure 1). Latency averaged 31 milliseconds in 2012 across all technologies, down slightly from 33 ms in 2011. 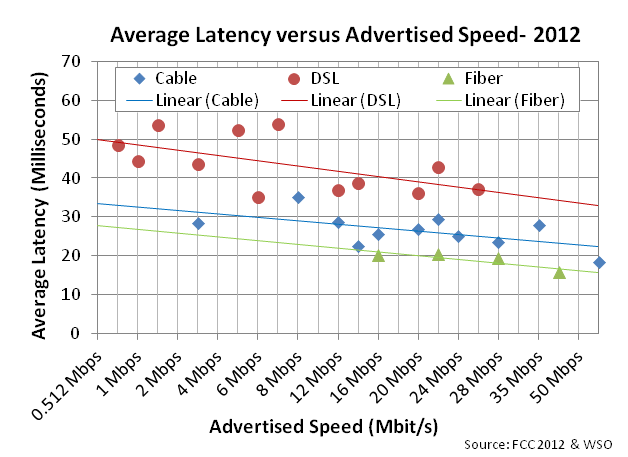 The researchers then tested the average time it took to download a typical web page over various bandwidth speeds.
In general, the time it takes to load a web page decreased as bandwidth speeds increase, but only up to about 10Mbps. Latency and object overhead limit response time starting at around 10Mbps and higher. For higher speed tiers of broadband, consumers are unlikely to see much if any improvement in web page load time and basic web browsing speed, say when moving from a 10 Mbps connection to 25 Mbps. Note that this assumes a single user per connection, households with many consumers connected simultaneously would benefit from increased bandwidth, and loading streaming videos and other multimedia would benefit from higher bandwidths. 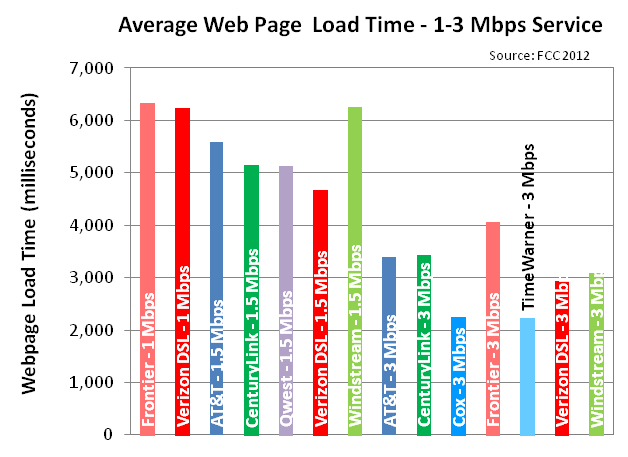 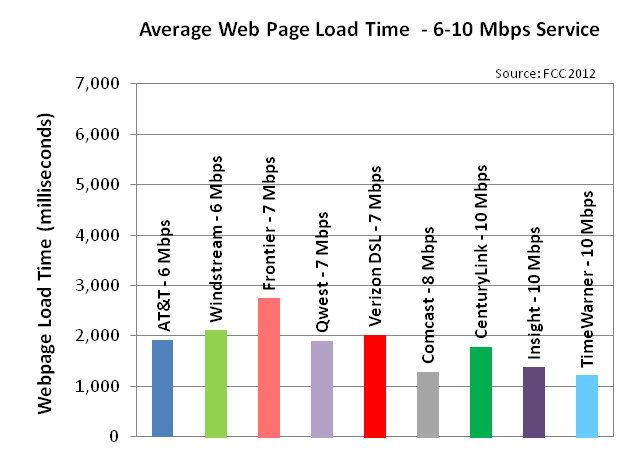 Moving up to 12 Mbps web page load time averaged 1.42 seconds, some 29% faster than a 6 Mbps connection (see Figure 4). At 15 Mbps the non-fiber providers averaged 1.16 seconds to load a web page, some 22.7% faster than a 10 Mbps connection. So as bandwidth speeds move from 10 to 15 Mbps you get diminishing returns in proportion to the increase in bandwidth, i.e., a 50% increase in bandwidth yields a 22.7% faster web page load time. 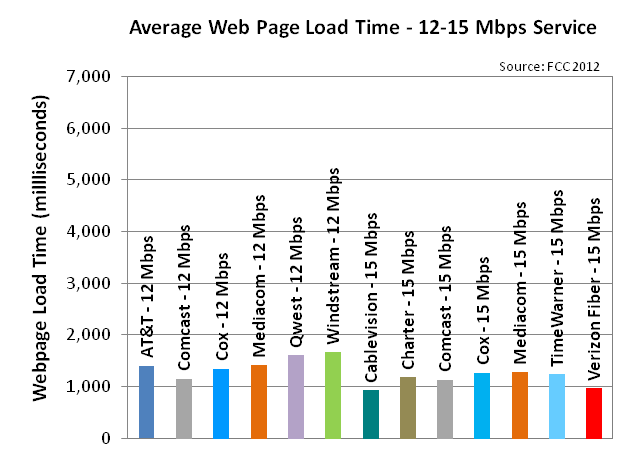 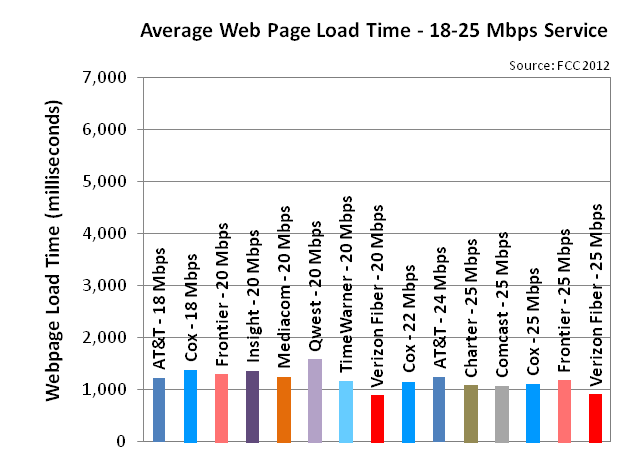 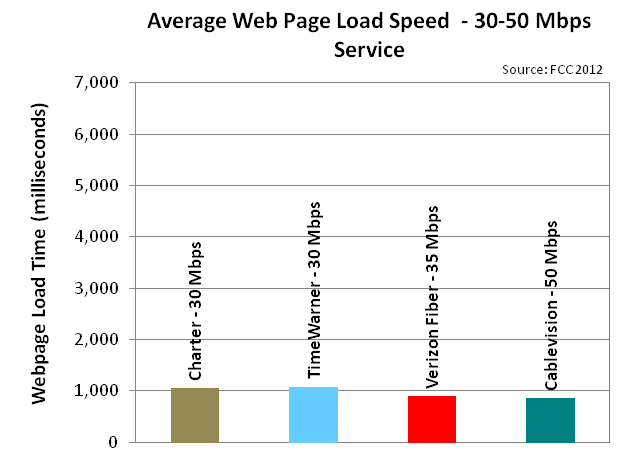 The FCC then tested the hourly download speed as a percentage of advertised speed by broadband provider. Of the cable providers, Comcast showed the highest and most stable download speeds (see Figure 7). 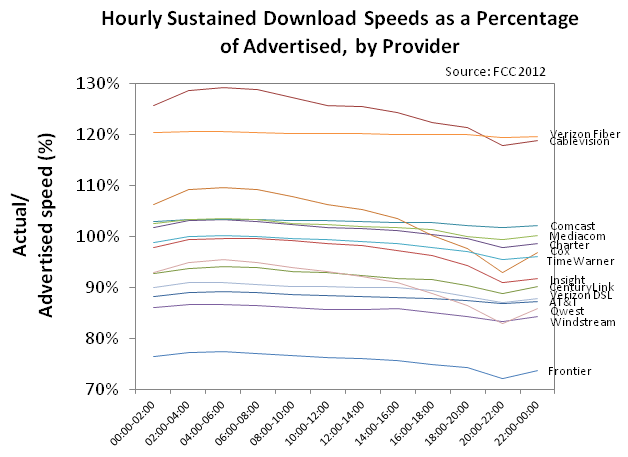 So despite the fact that above about 10 Mbps, users see little improvement in web page browsing speed, more people are upgrading from the mid-range tiers than other speeds (73% from 7-10 Mbps and 64% from 10-15 Mbps, see Figure 8). 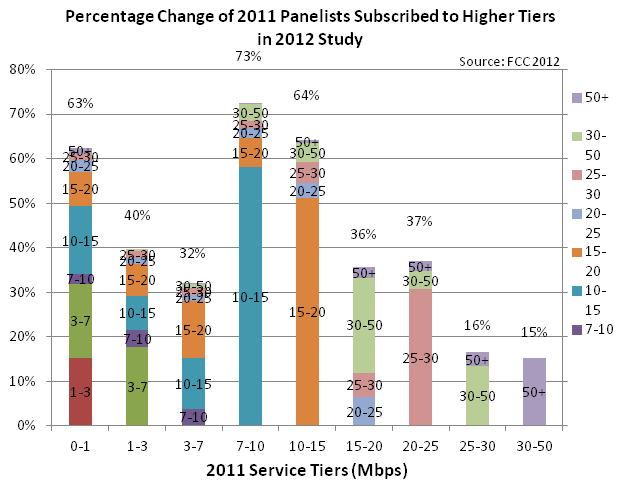 In terms of web performance, the most effective upgrade consumers can make is moving from 1-3 Mbps to 6-10 Mbps broadband. Above 10-12 Mbps, web page load times don’t increase in proportion to broadband speeds. Despite the fact that speeds above 10-12 Mbps have little effect on web page browsing speeds, more people are upgrading from the mid-range tiers than other speeds.