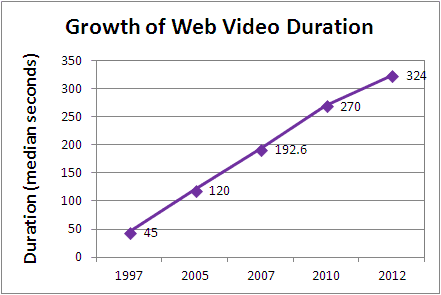 The 5.4 minute length that Comscore reported in December 2012 is actually down from October, when the average web video was 6.1 minute long. Google sites continue to top the video usage charts, with 153 million unique viewers, followed by Facebook.com with 58.8 million, VEVO with 51.6 million, NDN with 49.9 million and Yahoo! Sites with 47.5 million. Americans viewed 11.3 billion video ads in December, with Google Sites ranking first with nearly 2 billion ads.

As bandwidth continues to improve, the size of the average web video continues to increase. Videos are a great way to engage viewers, and have been shown to increase conversion rates. To be most effective however, videos should be optimized for web viewing and search optimized. A fat, unoptimized video with no captions or descriptive text will fare worse than a trim, SEO optimized video surrounded by descriptive captions.