Last time we tested a Call Only Pay Per Click campaign against a conventional “dentist” campaign to see how call only PPC ads improve conversion rates and cost per call. By adding a single call only campaign to a PPC account, the number of calls nearly doubled, and the cost per call dropped by a factor of 3.7.

Due to the success of the call only campaign, with the client’s permission, we expanded the number of call only campaigns and dialed down or paused the conventional PPC ads. In this article we’ll look at the effects of expanding and optimizing call only PPC campaigns on cost and conversion rates.

By labeling your conventional and call only campaigns in Google Adwords you can analyze their performance using filters. The conventional PPC campaigns are shown in Figure 2. Note that some of the campaigns shown were paused during the test period. We’ll revisit the campaign again in a month to see about any improvements.

The conventional PPC campaigns had an average conversion rate of 5.5% generating 27 calls, for $7939.

Conversion Rate and Cost Per Call

The results of expanding our call only campaigns are shown in Figures 4 and 5. The conversion rate of the call only ads is more than 10 times higher than conventional PPC ads (see Figure 4). The cost per call dropped from $294.33 to $5.06, some 58 times cheaper per call. 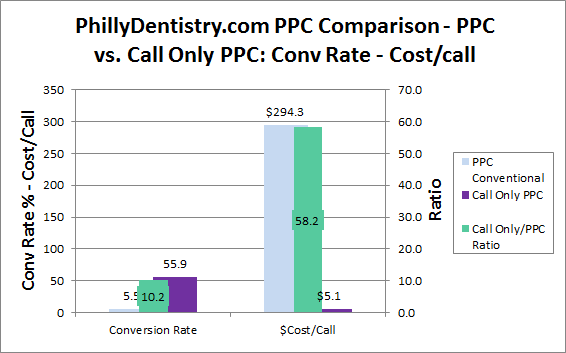 One thing to watch out for with call only ads are negative keywords. If you use a broad matched keyphrase like “dentist”, calls may be generated when users search on other dental offices. Be sure to include plenty of negative keywords listing other local businesses that are similar to your target (see Figure 6). We used a combination of broad and exact match phrases at both the ad group and campaign levels. 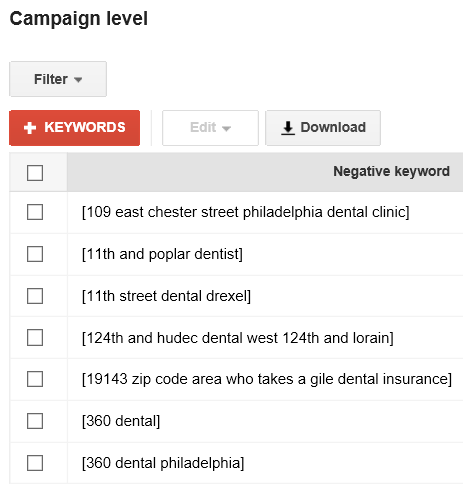 Case Study: Call Only PPC Ad Optimization
Call only PPC campaigns are a cost-effective way to drive phone calls to your business. In this article we test the effects of a call only campaign on the cost per call for a dental website.
Case Study: PPC Optimization
Learn how to optimize your PPC campaign to boost leads and reduce costs. We explore location targeting with multiple radii, bid adjustments, and dayparting.
PhillyDentistry.com
The target dental site of Dr. Ken Cirka. Thanks to Dr. Cirka for volunteering to be a test case for this ongoing PPC study.