Web users want site designs to be both easy to use and helpful, as prior human-computer interaction (HCI) studies have shown. But most such studies haven’t ranked interface design features in achieving these objectives. Since this knowledge can positively impact site design or re-design, this article will ask and answer the question – is there a single interface design feature that maximizes both user goals; usability and utility? If so, how important is this feature compared to others?

A recent study examined the effects of five web design features – customization, adaptive behavior, memory load, content density, and speed – on user preference for web-based services. The 2009 study by Turkish and American HCI researchers Seneler, Basoglu, and Daim tested site designs for online flight reservations. The results of this study are valuable because insights into the relative importance (to users) of interface attributes can help web designers increase adoption and retention rates, and boost online revenues. As you can see from Figure 1 they found that the most preferred feature was high speed, followed distantly by minimal memory load, adaptive behavior, low content density, and customization features. 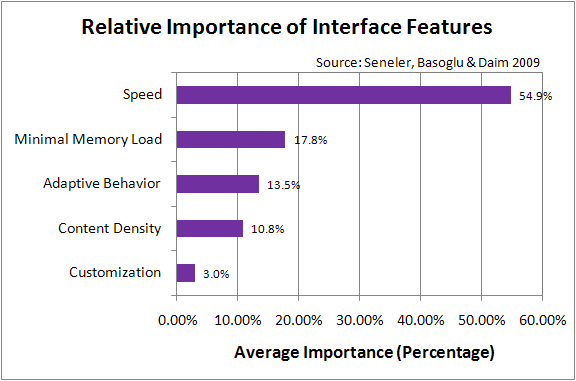 As Web 2.0 technogies like Ajax and DHTML have become more widespread, websites have grown more complex. The size of the average web page has tripled in five years, while the average number of objects has doubled. All of this largess has led to inevitable slowdowns in display speeds. Some argue that, with bandwidth inexorably increasing, slow response times have become less of an issue than in our dial-up past. The data show otherwise.

The increase in broadband speed and penetration has barely kept ahead of the growth in page size and complexity. Today’s broadband users, despite their higher average download speeds, are experiencing the sluggishness reminiscent of earlier, less advantaged technologies, while bandwidth-challenged users have been left behind. The result? Most users are suffering from response times similar to those of five years ago, when lack of speed was the most common complaint (Ceaparu, Lazar, Besseiere, Robinson, and Shneiderman 2004). Clearly the importance of speed remains high today. But just how important is speed when compared to other design factors?

The researchers tested the following attributes, selected from results of previous research and their own survey:

Adaptive behavior
The ability of the user interface to track a user’s behavior and respond appropriately.
Content density
The concentration of content elements on the user interface of a design. Search performance (defined by the search time divided by the number of elements in an interface) decreases significantly as the number of elements increases (Vlaskamp, Hooge, and Over 2002).
Customization
Interfaces that allow adaptations to particular user preferences and tasks they wish to perform.
Minimal memory load
Minimal (human) memory load is achieved through easily recognized, sufficiently detailed interfaces that offer clear solutions (Ozen and Basoglu, 2006). This minimizes cognitive overhead on short-term “working memory” during complex thinking activities. Optimum learning occurs when the cognitive load is kept to a minimum.
Speed
Speed is a measure of how fast a web site responds to user input. There are two main components to web site speed, 1) initial download and display speed and 2) the response time of particular web page elements to user input. Users are sensitive to download speed (King 2008), with tolerable thresholds that depend on perceived complexity, bandwidth speed, and other factors (such as age). But page element delays (after a page has loaded) are even more important to minimize than download times. This study tested the effects of varying post-display response times on user satisfaction.

Conjoint analysis uses various tradeoff questions to measure how customers value a product or service. Unlike other multivariate techniques, conjoint analysis specifies both the independent variables (attributes) and their values (levels). One hundred fifty participants completed an email survey using an interactive website simulation to rate various interface factors. The resulting five attributes and their levels were used as inputs for the conjoint analysis.

The conjoint analysis software used was from Statistical Package for the
Social Sciences (SPSS). SPSS software was used to create 32 initial alternatives of the five design attributes with appropriate levels. Using SPSS’ fractional factorial design, these 32 alternatives were reduced down to 8 alternatives that still ensured the accurate estimation of effects (see Table 1).

The eight alternatives were presented to users to simulate booking an online flight ticket from Istanbul to Antalya through an airlines’ web site. Each screen simulated each step in the reservation process.

The result of the conjoint analysis of the five web design factors for 150 participants is shown in Figure 1. Speed was clearly the most important factor influencing the average participant’s preference about the product prototype (55%). Minimal memory load is the second-most important design attribute at 17.8%, some 3 times less important than speed. Adaptive behavior (13.5%) and content density (10.8%) came in a close third and fourth, while customization came in a distant last at 3% importance.

As conversion rate optimizing marketers do with modeling personas, the researchers went further to segment this homogeneous segment of the population into segments based on similar groups of data. To identify different market segments, Quick Cluster, an SPSS statistical clustering program, was used to cluster the 150 participants into groups based on their similarities and preferences. The three groups identified from the data were “speedy,” “supported,” and “controlled” (see Table 2).

The Speedy group prefers high-speed interfaces (1.77) with minimal memory load (0.72). In addition to fast response times, adaptive behavior is important to this group (0.50). Speedy people prefer interfaces that do not have customization features (-0.16) or low content density (-0.03).

The Adaptive group of people prefer interfaces that adapt to user input (1.06). They prefer high-speed interfaces (0.43) that require minimal cognitive overhead (0.34). There is some preference for customization among this group (0.23), and they do not prefer low content density (-0.53).

Compared to the other groups, the Keep It Simple group has a high preference for low content density (0.98). They prefer speedy interfaces (1.62) nearly to the same degree as the speedy cluster. They have the lowest preference for minimal memory load (0.28) and tie the supported group for their low preference for customization (0.23). The controlled group does not prefer adaptive behavior in an interface (-0.13).

These results show that most users prefer sites that have high-speed features, require minimal memory load, adapt to user behavior and use low content density. Even though computers and connection speeds are getting faster, real-time response time is still the most important factor when designing a website.

There is some evidence that users can be grouped according to major preferences among the five web design factors into what I call Speedy, Adaptive, and Keep It Simple. The Simple and Speedy clusters both prefer speedy interfaces, with either low content density or minimal memory load second only to speed. The Adaptive cluster was one-quarter the size of the other speed-oriented clusters above, but speed still came in second behind adaptive behavior.

You can minimize memory load by simplifying interfaces with uncluttered navigation bars with fewer options, trimming text to minimize the number of words on a page, minimizing animation and, most importantly, optimizing image file sizes and multimedia.