The healthcare.gov website has evolved since the first time we reviewed the site. The site is more feature rich now and larger and more complex (see Figure 1). 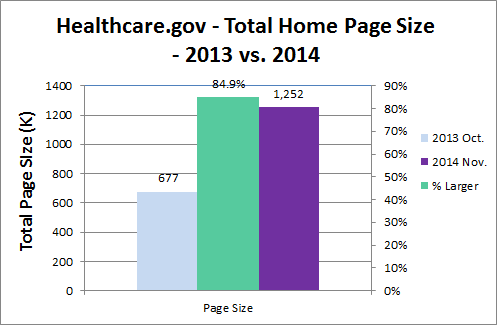 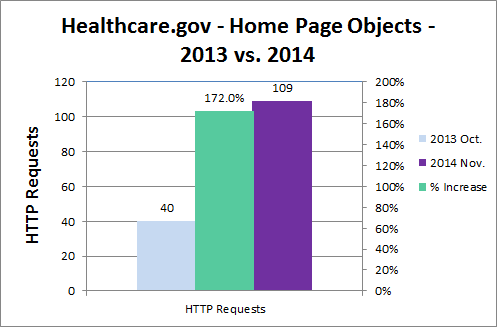 With the larger page size and complexity, the page load times and “above the fold” times increased proportionally for healthcare.gov. The load time increased by 78.5% from 5.9 seconds in Oct. 2013 to 10.5 seconds in Nov. 2014 (see Figure 4). 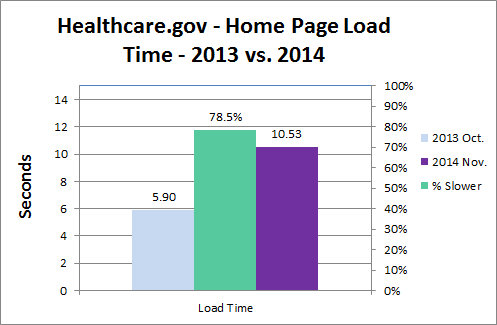 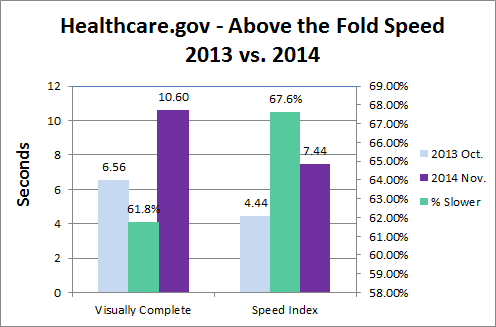 So the site is clearly larger and slower, but how consistent is the response time under load? The site takes advantage of Akamai and reportedly has more backend infrastructure. The site didn’t have as many “waiting room” delays as before, but still spawned a few errors (see Figure 6).

One nice feature about the website is that you can create your health plan in stages, and come back later to finish (see Figure 7).

This error code corresponds to a website issue. Users seeing this error are told to wait a while to see iand try again, or delete their 2015 plan and create a new one.

Let’s take a look behind the screens to analyze why healthcare.gov is slower than before. The overall page results are shown in Figure 9.

A waterfall (DSL) of the loading sequence reveals some issues (see Figure 10). 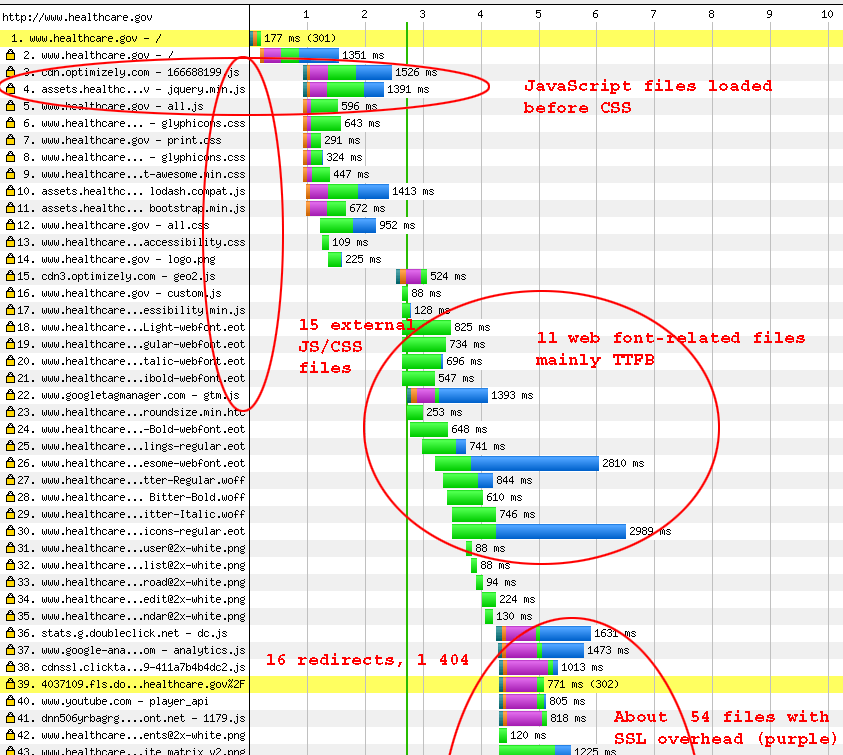 The waterfall shows a number of performance issues including JavaScript loaded before CSS (can block rendering), 15 external JS/CSS files before the page starts to render in earnest, 11 web font-related files, 16 redirects and 1 404 error (file missing), and more than 50 files with SSL overhead. In the larger waterfall you’ll notice the Home.png main banner image loads slowly, it was 471K! Optimized in Photoshop as a JPEG shrunk the file to 26K (see Figue 11)

The home page has grown to 1.23MB requiring 113 requests. This is smaller than the average top 1000 page size (1807K) and about the same as the average number of objects (114, source httparchive.org). Here are the issues with the new healthcare.gov website (many of which are still there from one year ago):

While the healthcare.gov website has improved in availability and consistency, performance problems remain one year later. Healthcare.gov home page response times have slowed down by 62% to 78%, while page size and complexity have grown by 85% to 172% over the past year. We offer some triaged recommendations to improve the speed of healthcare.gov.

Healthcare.gov Performance Review
This article evaluates the website performance issues of the healthcare.gov site, and offers some solutions to improve speed. A brief analysis shows a number of issues that could be addressed to improve the user experience. This was our initial analysis of the site shortly after it officially launched in October 2013.
Healthcare.gov Website Performance Revisited
To test President Obama’s promise that the new healthcare.gov web site would be fixed by December 1, we speed audited the improved site. The site showed some improvements in “above the fold” speed, but slower load times than the old version. Optimizing the site with Radware’s Fastview service could cut load times by more than 68%.