How do the top 100 weblogs compare with the 1000 most popular websites? What are the differences in size and performance between these two samples? What conclusions can we draw about advertising use between and within the two surveys? To find out, we updated a survey by Pingdom, an uptime monitoring company based in Sweden, who recently analyzed the top 100 blog home pages listed in Technorati for their size, composition, and web site performance. This article summarizes Pingdom’s findings, adds a CSS analysis, compares the top 100 blogs with the top 1000 websites, and offers some advice.

Pingdom’s October 2008 survey found that the average home page of the top 100 weblogs is around 934 KB in size, with nearly two-thirds of total page size due to images (61.3%), 17.2% due to scripts, 15.3% due to HTML, and 5.9% from CSS. The average top 100 blog home page had 63 images (including HTML and CSS images) and 9 external scripts. The number of external CSS files was not reported. To update the survey, we tested the number and size of external CSS files for the top 100 blogs.

The Average CSS Profile of the Top 100 Weblogs 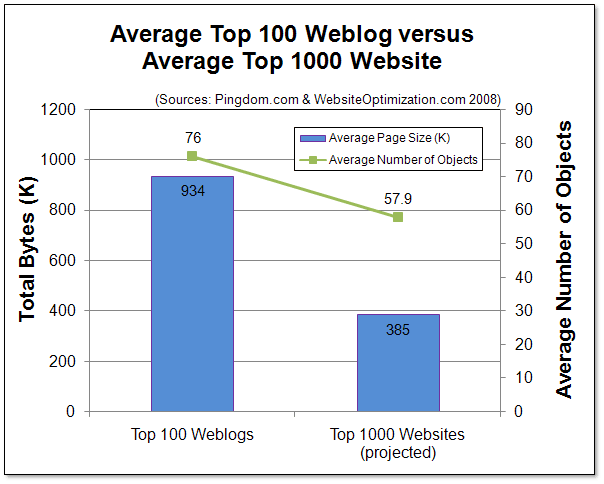 The Need for Image Optimization

The total size and composition of these top 100 weblogs will bog down even low-end broadband connections of 1Mbps to around 8 seconds. At 56Kbps dial-up speeds a 1MB home page would take well over 2 minutes to load. At broadband speeds, we found that object overhead dominates web page display times. With nearly two-thirds of the average top 100 weblog taken up by graphics (61.3%) most of the optimization effort should be devoted to graphic optimization and consolidation. CSS sprites can be used to consolidate decorative graphics (rounded corners, backgrounds, and graphic bullets) to save HTTP requests. Image optimization techniques such as minimizing and simplifying drop shadows (requires layered Photoshop originals), weighted optimization to differentially compress JPEGs and graphic text, minimizing dithering and bit depth, and converting to different graphic formats (JPEGs to dithered PNGs for example) would shrink the graphic payload significantly.

CSS Sprites: How Yahoo.com and AOL.com Improve Web Performance
Learn how AOL and Yahoo! use CSS sprites to improve performance for their busy home pages. CSS sprites save HTTP requests by using CSS positioning to selectively display composite background images. To maximize accessibility and usability, CSS sprites are best used for icons or decorative effects.
Graphics Optimization Tips
An archive of graphics optimization tips from WebsiteOptimization.com, including CSS Sprites, weighted optimization, and choosing the right image format.
HTTP Compression
HTTP compression uses standards-based gzip and deflate compression algorithms to compress your XHTML, CSS, and JavaScript to speed up web page downloads and save bandwidth. Some of the top 100 blogs did not use HTTP compression, which would shrink their HTML, CSS, and JavaScript significantly (by 75% on average in tests that we ran previously for Speed Up Your Site).
Load Size Analysis of the Top 100 Blogs
An analysis of 100 top blogs listed in Technorati. For each blog, the home page has been analyzed for size, composition, and download speed. November 5, 2008.
Optimize Parallel Downloads to Minimize Object Overhead
With the average web page growing past 50 external objects, object overhead now dominates most web page delays. Increasing parallel downloads by using multiple hostnames can realize up to a 40% improvement in web page latency.