Ball heads provide stability and mobility for photographers on the go. Combined with a stable tripod a solid ball head can help dampen out vibration for sharper photographs, especially for larger enlargements. Sharper photographs and videos make for smaller, higher quality multimedia for the Web. This article reviews some professional ball head options and looks at vibration testing with a laser vibrometer.

What Is a Ball Head?

A ball head sits atop a tripod to provide support for cameras and camcorders. Ball heads provide more flexibility than 3-axis “pan-tilt” heads, they’re faster to use and lighter in weight. Aiming and leveling can be done in one fluid motion, a feat that would take multiple steps with a pan-tilt head (see Figure 1).

Ball heads, like the author’s Arca-Swiss B1 shown in Figure 1, are convenient for hiking. They have higher strength to weight ratios and fewer protruding knobs to catch on passing branches. Arca Swiss has replaced the B1 with the smaller Z1 monoball, shown with a flip lock lever (see Figure 2). Note that the flip lever version of the new Arca Swiss Z1 shown above is slightly lighter than the classic clamp model. Some users have complained that rotating the lower and smaller panning knob crimped their fingers on some tripod bases, so the knob has been replaced by a lever.

What Kind of Ball Head?

Ball heads come in different shapes and sizes designed to support different types of cameras. Like tripods they are rated by the amount of weight that they can support. The features to look for are ball diameter, multiple secure contact points to the ball, variable tension control, height (lower is better), and rated support weight. The larger the ball and the more secure the mechanism, the more solid the ball head. You can omit a panning base for less weight by panning with the ball. However, panning while your camera is flopped 90 degrees requires a panning base. Table 1 compares different pro-level ball heads.

*Note that there is no standard test for load capacity, the maximum weights listed above are provided by the manufactures. In my opinion some may be optimistic, and some are conservative (like RRS) based on their design. A more useful measurement of stability would be to measure resistance to torque, which is where sharpness is lost. Since the center of gravity of the camera and lens is usually not exactly centered over the head and tripod, shutter vibration coupled with the camera/lens weight creates a twisting force (torque) that can cause creep or “micro-slip” and even cause the lens to drop (otherwise known as flop). Creep can show up as reduced sharpness or blur in bigger enlargements. That is why video tripods (like Sachtler, Vinten, Miller, and high end photo pods like Dutch Hill, Manfrotto, and Ries) have 6 shafts, (2 in each leg) to resist torque for a more solid platform. Shutter and mirror vibration is better damped by composite materials, like carbon, wood, basalt, and fiberglass, rather than metal tripods.

^The Markins Q-Ball M20-T and Arca Swiss B1 have been discontinued. Markins still offers the M-10 in a titanium version and Arca Swiss has replaced the B1 with the lighter and lower Z1 ball head.

With the above load capacity proviso in mind, the load to weight ratios are revealing here. The mid-range Markins head has a ratio of over 80:1 (see Figure 3), while the Arca Swiss B1 has a ratio of 52.4:1. The Arca Swiss Z1 has the highest load to weight ratio of 81:1. The Kirk BH-1 (and the smaller BH-3 at 19 oz) and Markins heads use a design similar to the Arca-Swiss B1 and Z1. The differences are the spherical versus aspherical ball (Kirk versus Arca-Swiss), weight, height, and quality of contact points to the ball. Since our last update, most of the manufacturers have reduced the weight of their ball heads (M20 and Kirk) or come out with new lighter models (Z1). The new weights and strength to weight ratios reflect these improved models (see Table 1).

Markins hard anodizes their aluminum balls, which they claim increases stiffness and reduces “micro-slip.” Markins makes both aluminum and titanium versions of their M20 and M10 ball heads (48/44mm ball diameters respectively). They also offer “L” versions with left-handed controls that they claim are faster to operate in the field. Markins ball heads feature their patented bi-axial progressive locking mechanism that allows multiple points of contact to the ball which allows for higher loads and lower plate heights. The weight of Markins’ latest Q-Ball M20 has been reduced from 640 to 568 grams, including the clamp. Markins new Q-Ball Q3 “Emily” ball head weighs only 385 grams including the clamp, has a ball diameter of 38mm and supports up to 30 kg (see Figure 3). 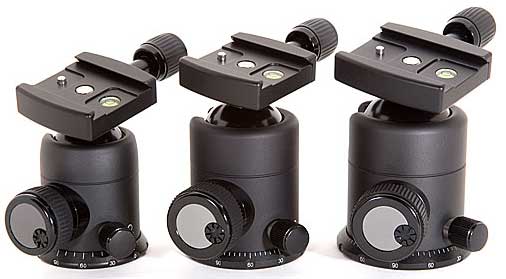 The Really Right Stuff ball heads (RRS BH-55 Pro, BH-40, and BH-25) have a unique side-clamping design that allows a lower profile (see Figure 4). This innovative design gives the RRS heads a lower height (92.7mm) than the Arca Swiss-style heads, about as tall as the Burzynski head. Lower is better when it comes to reducing vibration due to the shorter beam length. Their load capacity estimate of 50 pounds seems conservative to me. Moose Peterson prefers the RRS BH-50 head, claiming the alignment between the panning base and the body is more precise for stitched panoramas.

Kirk Enterprises offers the BH-1 and BH-3 ball heads. The revised BH-1 has a 53mm ball diameter, and is designed to carry larger lenses without the occasional lockup problems of the Arca Swiss B1 (see Figure 5). Kirk has replaced the quick release plate with a redesigned model with a spirit level, and reduced the overall weight from 2 to 1.875 pounds. The smaller BH-3 has a 42mm ball and weighs 19 oz, and is designed to carry lenses smaller than 300/2.8 or 400/3.5. 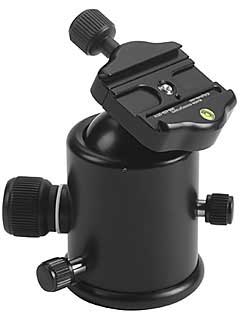 The Burzynski head was designed to support telephoto lenses, but can be used with an “L” bracket to shoot landscapes, where the 45 degree tilt would not be a limitation. With its 60mm ball the Burzynski head is reportedly very stiff (see Figure 6), and can support 40 to 50 Kg large format cameras. The new model with a smaller 70mm base weighs 1030 grams. 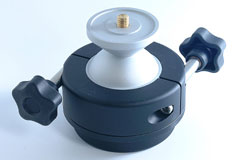 Note that the Burzynski head can reportedly replace the top plate of the Gitzo 1325 tripod and be clamped in using the Gitzo top plate clamp. Replacing the top plate with the Burzynski would lower the head by about 14 mm from its 92mm height for a height of 78mm from the top of the tripod. Lower is better when it comes to ball heads, due to a lower bending moment.

Known for their Acratech Ultimate ball head, Acratech has released a variant on the theme with the V2 ball head. Weighing just 0.45 kg with a 38mm ball, the V2 can support over 25 lbs (see Figure 7). 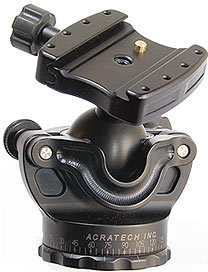 On the high end, Markins makes titanium versions of their M20 and M10 aluminum ball heads. Available in limited quantities, these titanium-bodied models use a hard-to-machine titanium-vanadium alloy that has a high stiffness to weight ratio. The M20-TI has a load to weight ratio of 78:1 (see Table 1 and Figure 8), while the M10-TI has a load to weight ratio of 89:1 (110/1.23lbs). The discontinued M3PQT had an identical ball size to the B1 (54mm) and was 15 grams lighter and 6 millimeters shorter than the B1. 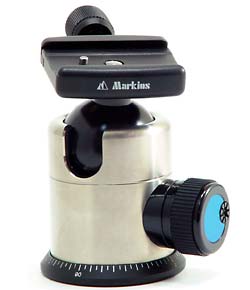 Feisol manufacturers ball heads in 50mm and 70mm sizes. One interesting design is a carbon-fiber wrapped version of their 50mm ball model (see Figure 9). This model has now been discontinued but the non-carbon fiber version is still available. 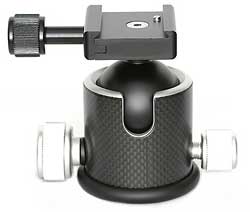 To see how camera supports perform you can conduct vibration tests with different tripod and ball head combinations. People have used coins, a glass of water, laser pointers, and other devices to test vibration. These vibration tests are useful for relative comparison between different support systems, but to find out how much movement actually occurs you need more precise measuring equipment. Dr. Charlie Kim, an engineer and assistant to Mr. Mah of Markins, has done just that. Dr. Kim has tested different tripod and ball head combinations with a precision gap sensor using laser technology to find the vibration characteristics of different designs (see Figure 10). 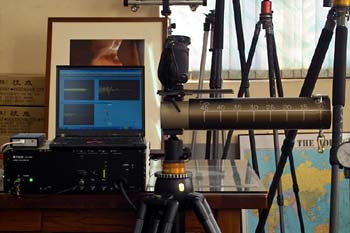 Dr. Kim found that “tuned” tripods (those with vibration absorbing base plates and titanium metal spikes) perform better than off-the-shelf tripods. Some ball heads performed better than the others tested, not surprisingly the Markins and Arca-Swiss heads (note that Dr. Kim did not test all the ball heads shown in Table 1 above). The Arca-Swiss B1 showed “micro-slip” under heavy loads or high frequencies, however.

A high quality ball head can improve the sharpness of your photographs. Choose a ball head that is matched to your camera weight, and your tripod to avoid a top-heavy setup (your tripod should be at least 2.5 times the weight of your ball head). A solid camera support system will minimize movement and absorb vibration to ensure sharper shots and smoother pans.

Acratech
Makers of the Ultimate Ball Head and the V2 ball head, both patented, innovative, lightweight wraparound designs that weigh less than a pound and support over 25 pounds.
Feisol
Makers of the CB-50 and CB-70 ball heads. The CB-50 has a 50mm ball, weighs 540 grams, and supports up to 19 kg.
Burzynski Tripod Head
Bjorn Rorslett’s review of the Burzynski ball head. Bolted to his Sachtler tripod the combination makes for a very stiff camera support.
Isarfoto.com
German photography dealer that sells the Burzynski and Arca-Swiss ball heads.
Kirk Enterprises
Offers the BH-1 and BH-3 ball heads.
Markins
Makers of the M10, M20, and titanium ball heads. Made out of hard anodized aluminum alloy and high-vanadium titanium.
Multimedia: Use Image Stabilization
Image stabilization creates sharper pictures by damping vibration to avoid motion blur. Gyroscopic stabilizers steady cameras for sharper photographs and videos. From Speed Tweak of the Week.
Multimedia: Use a Stable Tripod
A stable tripod creates sharper pictures and videos by damping out vibration. Sharper shots mean smaller multimedia destined for the web.
Precision Camera Works
Authorized Arca-Swiss reseller and repairs. See also their Care and Feeding of the Arca Swiss Monoball for some pointers on ball head maintenance.
Really Right Stuff
Makers of the BH-55, BH-40, and BH-25 ball heads.
The Sharpest Image
A comparison of tripod stability, vibration reduction, handheld shooting, and what is required to achieve critically sharp images. In this paid review (69MB) Lloyd Chambers tests different factors to find what causes blur with longer lenses. Significant differences in image sharpness are shown between the different tripods tested, apparently due to resonance of the tripod legs – and the results might be surprising to some. While the author tested the Burzynski, RRS BH-50, and Arca Swiss B1, he does not quantify the difference in stability between these pro-level ball heads. In response to my query Lloyd reports in his blog “Indeed, I did swap heads between the G1325 and G1548 tripods, but found little evidence of any variance in sharpness caused by the ballhead, with image sharpness apparently being dominated by tripod-leg resonance. “
Vibration characteristics of Tripod/Camera
By Dr. Charlie Kim, a Markins engineer who tests various tripod/ball head combinations for vibrations.