Vibration is one of the photographer’s worst enemies. Slow shutter speeds and telephotos usually don’t mix well, often resulting in blurry shots. A stable tripod can help to ensure sharper photographs and videos destined for the Web. But what about situations where a tripod is not an option?

That’s where image stabilization comes in.

Once relegated to professional-level cameras, image stabilization technology has trickled down into consumer cameras and lenses. Image stabilized lenses and cameras use tiny gyroscopes to counteract camera motion for sharper shots. If you’re buying a new camera look to see if its got image stabilization inside, it could improve your keeper ratio dramatically. To illustrate how effective image stabilization can be, we’ll show you an extreme example of aerial photography from a vibrating plane.

What Is Image Stabilization?

Image stabilizers work to give you sharper pictures by counteracting camera shake. Image stabilized lenses and cameras use two tiny gyros that precess with camera movement and send a signal via a servomotor to move lens elements, a prism, or the sensor plane in the opposite direction of your camera’s movement. You shake one way, it shakes the other way. Larger gyroscopic stabilizers can steady your entire camera, whether it is optically stabilized or not. For handheld shots with slower shutter speeds or aerial photography, image stabilization is an invaluable tool for damping vibration to minimize motion blur.

Sharper stills and steady videos mean higher quality originals and higher compression ratios. The fewer details per frame and fewer changes between frames, the smaller you can make the file. The sharper your original, the smaller it will be when you optimize it for the Web.

Unlike optically stabilized lenses which are limited to the same manufacturer (Canon’s IS or Nikon’s VR series), gyroscopic stabilizers can be used with any camera or binocular (stabilized or otherwise) to ensure sharper pictures and smoother pans. Just hook up a gryo, and the entire mass of your camera and lens will be stabilized. Mass stabilization allows slower shutter speeds for special effects; a crisp car zooming along a blurred road for example.

Gyros consist of a gyroscope with two perpendicular spinning wheels and a battery pack. The gyro attaches to your tripod socket and acts like an “invisible tripod” (see Figure 1). 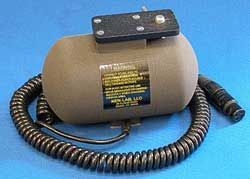 Kenyon Laboratories offers precision gyros from 1.5 to over 15 pounds that typically stabilize rigs twice their weight. Unlike in-lens systems sold by Canon, Nikon, Panasonic and others, Ken-Lab gyros stabilize the entire camera and lens along two axes. With two precision wheels spinning at over 22,000 RPM, you can feel the steadying power when you hold one. Adriel Heisey used a custom-made plane and a gyroscopic stabilizer to shoot the images for his books on the Navajo Nation and Sonoran Desert. (see Figure 2). 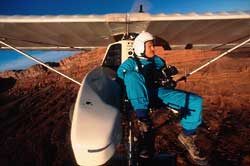 I’ve found that for aerial shots even at 1/1000 of a second gyro stabilization can make a significant difference in sharpness. Figure 3 shows an example of an aerial shot I took with a Ken-Lab KS6 gyroscope. 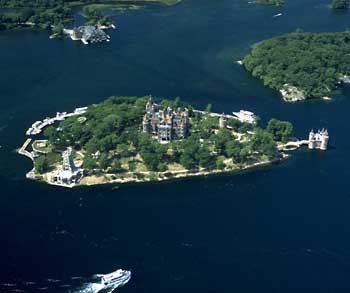 This picture was taken from a Cessna flying over Boldt Castle near Alexandria Bay, New York. Boldt Castle is a popular tourist attraction in the Thousand Islands. Gyro stabilization made this shot possible. Without stabilization, the vibration from the motor and turbulence would blur this shot, even at high shutter speeds. Zooming in on the castle shows a closer look at the castle walls (see Figure 4).

Note in the uncorrected crop that the picture looks somewhat washed out, and needs some sharpening. This is typical behavior with PhotoCD scans. Tweaking the image’s levels and curves, and bumping up the saturation, contrast, and sharpening gives the image more punch (see Figure 5).

Drum scans give the highest image density for larger enlargements and higher quality images (150-200+ MB). This shot of one of the Thousand Islands shows what kind of results you can get with a gyroscope and a larger format (see Figure 6). 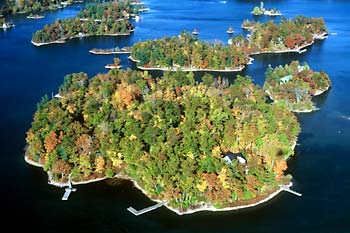 Zooming in on the photo above shows the effects of the gyroscope. You can see individual leaves on the water, and the planks in the dock below (see Figure 7). 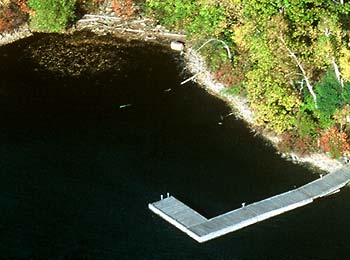 First introduced by Canon in 1993, image stabilized lenses are now appearing in consumer-level cameras. Nikon followed soon after with its “VR” series of lenses, and Panasonic and others now offer image-stabilized digital cameras with high quality lenses (Lumix, etc.). Minolta takes a different tack by moving the image sensor to counteract camera shake. Using these cameras and lenses will improve your photographs, and reduce the number of rejects. The newest models of IS lenses from Canon can even be used on a tripod or atop a gyroscopic stabilizer. 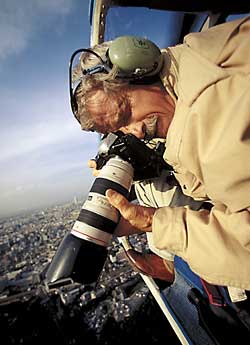 Yann’s Earth from Above: 365 Days cover shot of a colorful Yellowstone spring was shot from a helicopter using a Canon image stabilized lens (see Figure 9). 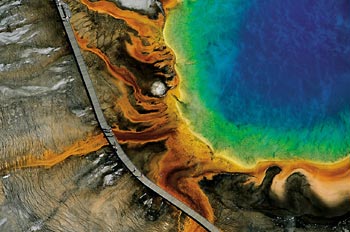 Figure 9: Grand Prismatic Spring, Yellowstone National Park, Wyoming, United States (44Â°26Â¹ N, 110Â°39Â¹ W). Situated on a volcanic plateau that straddles the states of Montana, Idaho, and Wyoming, Yellowstone is the oldest national park in the world. Created in 1872, it covers 3,500 square miles (9,000 km2) and contains the world’s largest concentration of geothermic sites, with more than 10,000 geysers, smoking cavities, and hot springs. Grand Prismatic Spring, 370 feet (112 m) in diameter, is the park’s largest hot pool in area and third-highest in the world. The color spectrum for which it is named is caused by the presence of cyanobacteria, which grow faster in the hot water at the center of the basin than at the periphery where the temperature is lower. Declared a Biosphere Reserve in 1976 and a UNESCO world heritage site in 1978, Yellowstone National Park receives an average of 3 million visitors per year. The continent of North America, which contains the five most visited natural sites in the world, is visited by more than 80 million tourists per year â€¹ 11% of world tourism in numbers, but 18% of world tourism in revenues. From Yann Arthus-Bertrand’s Earth From Above: 365 Days, used with permission.

If you get the urge to take some aerial photographs, here are some tips for sharper shots:

Yann Arthus-Bertrand
Aerial photographer known for his popular Earth From Above: An aerial portrait of our planet series of books. Since 1990, Yann Arthus-Bertrand has been using Canon stabilized lenses and Pentax equipment to take his stunning aerials over hundreds of countries. Each shot includes a caption and GPS coordinate for those that wish to see the same view. His Earth From Above exhibition is on a world tour.
Robert Cameron
Known for his popular “Above” series of books, Robert Cameron takes Pentax 6×7 gyro-stabilized aerials of popular destinations including Las Vegas, London, and Yosemite.
Canon Image Stabilized Lenses
Canon makes a series of image stabilized lenses for their 35mm cameras, including wide angle and telephoto zooms.
Canon IS Lenses
Bob Atkins tests some Canon IS lenses for Photo.net.
Richard Eller
Author of the definitive Secrets of Successful Aerial Photography. This comprehensive aerial photography guidebook shows everything from equipment selection (including gyro use), technique, aircraft tips, to marketing your work.
Jason Hawkes
Author of twenty five books of aerial photography (“In the Air” series) including his recent Aerial: The Art of Photography from the Sky a behind-the-scenes look at the career of an aerial photographer including selected images and techniques.
Adriel Heisey
Aerial photographer with his own custom-made plane. He has appeared in National Geographic and has published two books, including In the Fifth World: A Portrait of the Navajo Nation.
Flowing with Yann Arthus-Bertrand
A review of Yann Arthus-Bertrand’s site viewing the Earth from Above. Caution: some users may find this site flow-inducing.
Kenyon Laboratories
Makers of gyroscopic stabilizers for binoculars, cameras, video cameras, and helicopters. Cross-mounted flywheels spin within a precision closed metal cylinder filled with helium at high speed to dampen vibration along two axes (pitch and yaw when the gyro is inline with the lens axis) for smooth pans and sharp aerial photography.
Minolta
Offers digital cameras (DiMage A2) with gyro-powered sensors that move to counteract camera shake. This technique of moving the image sensor could allow any interchangeable lens to be stabilized.
Multimedia: Use a Ball Head
A solid ball head dampens sharpness-robbing vibration for sharper and smaller images and videos for the Web. Compares some pro-level ball heads and offers some tips for sharper photographs. From Speed Tweak of the Week.
Multimedia: Use a Stable Tripod
A stable tripod creates sharper pictures and videos by damping out vibration. Sharper shots mean smaller multimedia for the Web. From Speed Tweak of the Week.
Nikon
Nikon offers image stabilized zoom lenses for their SLRs with the VR designation.
Panasonic
Some of Panasonic’s Lumix series of digital cameras incorporate optical image stabilization in their Leica-made lenses.
RC Helicopters
Remote-controlled helicopters can be used for aerial photography by utilizing gyroscopes to balance the load.
Researchers take the blur out of shaky photos
Researches at MIT and the University of Toronto have developed an image processing technique using missing sharp contrast gradients to deduce the camera shake path. This “blur kernel” is used to reverse the blurring effect through a process dubbed “deconvolution.” CNET News.com, Aug. 9, 2006.
Web Photos That Pop
Wendy Peck shows how to improve scanned photos by boosting contrast, saturation, and sharpness.
Yann Arthus Bertrand DVD
Spirit Level Film has produced a DVD film of Bertrand’s aerial work.