Over the past few years, ecommerce sites have made a concerted effort to improve their shopping experience. Most ecommerce sites employ third party gizmos to add features like chat, recommendations, reviews, personalization and localization. The problem is, these third party scripts extract a cost: inconsistent website performance.

The Growth of Third Party Services

With the big brand marketing departments demanding more dynamic Web 2.0 and 3.0 interactivity in their websites, web development departments have been scrambling to add sticky services to boost conversion rates and lower bounce rates. It is much easier to leverage existing mature services by inserting a couple lines of JavaScript than to roll their own services. Consequently the use of third party services has exploded, growing by 5.6 times in the 4 years from 2015 to 2018 (see Figure 1). 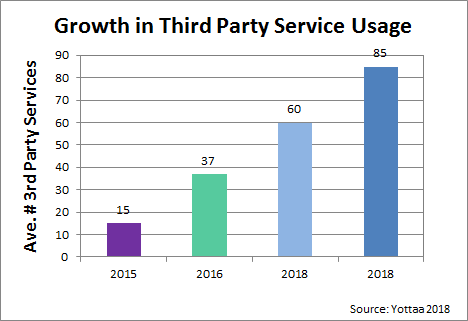 What Are Third Party Scripts?

When shoppers visit an ecommerce website, their browser starts to read and execute HTML. The browser will pause when it encounters a third party script, loading data from multiple databases, loading other hidden third, fourth or sixth party servers and services, off-site CSS and XML files, updating content in the browser, and sending shopper data back to be analyzed. The problem is even when deferred or loaded asynchronously JavaScript can delay loading of web page content. If the third party server is slow or even worse an error occurs, the web page can actually hang, stranding the shopper in cyberspace limbo.

While website outages during high traffic periods garner the headlines website slowdowns are ten times more likely than outages (Godskind 2010).
Gallino et al. (2018) found that a 10 percent decrease in website performance leads to a 2.6 percent decrease in decrease in retailers’ revenue and a decrease of 0.05 percentage points in conversion. Gallino found a 10 percent increase in the number of hosts increased load times by 1.78 percent. Gallino and company also found that decreased website performance impacts revenue and conversion rates more for mobile than desktop.

The average webpage requires 90 to 98 HTTP requests to load as of Jan. 1, 2019 (HTTParchive.org). The average ecommerce site uses 85 third party services, so one web page can require up to 300 HTTP requests to over 100 servers to fully load. By the time the page loads the poor shopper can lose patience and leave the site.

While research has found that the number of objects on a web page is strongly correlated with page load times, the variability of load times is strongly correlated with the number of servers required to load a web page. Third party services by definition are deployed from external servers so they not only increase load times but increase the variability of load times. Variable load times are harder to “attune” to according to research from Chris Roast “attunability” studies (Roast 1998).