For avid photographers a tripod is essential equipment. Even with today’s modern stabilization systems, longer exposures for water flow, cloud blur, or extreme depth of field still demand a sturdy tripod. The challenge is when you need to travel by air, especially in smaller airplanes. This article shows the results of optimizing the size and weight of a sturdy Gitzo GT4552TS travel tripod.

Airlines are squeezing passengers and their baggage to maximize profits. There are weight and size limits before charges kick in for both carry-on and checked luggage. To add to the confusion, airlines keep changing the rules and each one has a different policy. Check with the Transportation Security Administration (TSA) and your airline to find the latest requirements. At the time of this writing, the TSA allows tripods in both checked or carry-on bags as long as they meet the size requirements.

For domestic flights in the USA, a typical checked bag is allowed 62 inches in dimension and 50 pounds in weight. Most 3-section tripods will fit diagonally within a checked bag. However, photographers concerned about theft and damage prefer to carry on their tripods. Some 4-section tripods will fit diagonally within a standard US carry-on of 22x14x9 inches. With modern Gitzo tripods, you can unscrew the spikes to save about 1.25 inches off the folded length. In any event, it is a good idea to remove any spiked feet off your tripod and place them into your checked baggage or personal item before boarding.

We recently booked a trip to a remote park where the final legs are on a CRJ 200 and a Cessna 206 amphibious seaplane. The CRJ is notorious for its tight overhead bins. Airlines typically limit carry-on size to 18x14x7″ for CRJ 200 overheads (just under the size of American Airlines’ personal item). The author has measured CRJ 200 overheads and found that the height of the opening, 8.5″ tall, to be the limiting dimension. To be safe, get a bag that is 7 or 7.5 inches thick. Considering that bags with wheels are routinely gate checked on CRJ airplanes, soft bags are best, or thinner non-rolling cases may fit for early boarders.

The seaplane, on the other hand, will take only carry-on size or smaller bags with a total weight limit of 50 pounds. No larger checked bags allowed. Our old Gitzo 1325 3-section tripod won’t fit in our standard carry-on (the tripod is 26.4″ folded). We set out to find a more modern tripod that could handle heavier medium-format equipment (Pentax 67II, yes it’s true) and fit into a standard-sized carry-on.

Gitzo makes the Traveler series of tripods, which are known for their fold-over-itself technology. But as ingenious as the fold-over design is, Travelers only get as strong as series 2. The Mountaineer models go up to series 3, but include center columns which are inherently less stable. The Systematic collection offers stronger pods with strong top spiders that default to no center column in series 3, 4 and 5, perfect for heavier equipment and longer lenses. In the previous version 2 models, Gitzo offered two systematic travel tripods that fold down to easily fit into carry-on bags: the 5-section GT4552TS (see Figure 1) and the 6-section GT5562LTS (see Table 1). 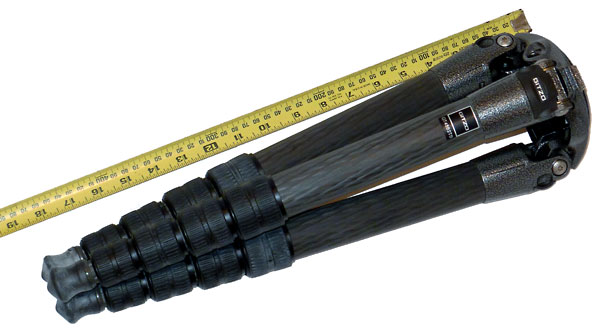 The larger series 5 model (GT5562LTS) extends to eye level, weighs 6.5 lbs and has a 5-series top spider which is quite large. If the Markins TH-500 tripod hub (more on that next) was not discontinued, this tripod would have been an interesting alternative (author’s note: if anyone out there wants to sell their TH-500, I’m interested). The GT4552TS looked perfect for our travel needs except for the large tripod hub section that is shared with the 3-series models.

The good folks at Nikonians and Markins came up with a solution. Combine the rigidity of Gitzo tripods with the ingenious engineering skill of Mr. Mah, founder of Markins (MAGICA is short for Markins, Gitzo, and Carbon). Markins developed replacement tripod bases and hubs that reportedly reduced vibrations over standard Mountaineer and Systematic tripods (Kim 2007). Unlike the tripod bases that screw into the top plate of select tripods, the more recent tripod hubs replace the entire Gitzo top spider (tripod hub) to make the tripod lighter to carry and smaller to pack.

Our goal was to upgrade to a higher series Gitzo tripod with less weight and more compact carry-on size than our 1325. The Gitzo GT4552TS 5-section tripod checked all the boxes and is beautifully designed: folding down to only 19.1″, extending to 52.8″, weighing in at 4.7 lbs and rated at 55 lbs capacity. The problem, however, with a Gitzo Systematic is its large top spider, which at a width of 5.5″ is hard to pack (see Figure 2). 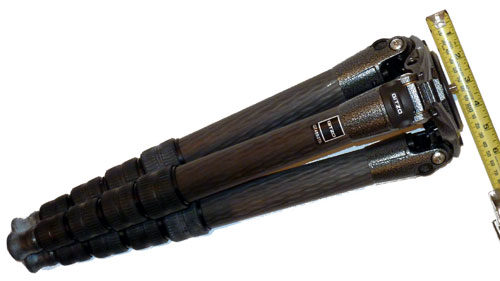 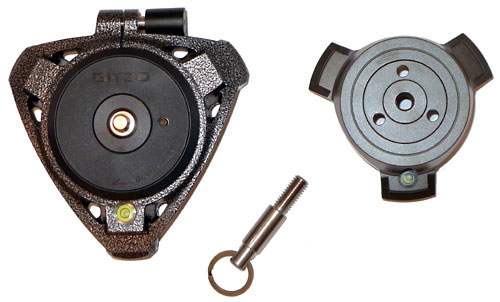 We ordered the TH-300 model plus titanium spikes and a weight “hook.” After replacing the Gitzo hub using Gitzo’s provided Torx tools, the Markins-enhanced tripod was transformed into a lightweight, packable, hiking machine (see Figure 4). 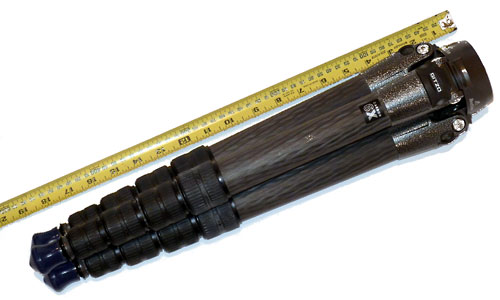 The new tripod, let’s call it MAGICAS 4.5 (Markins, Gitzo, Carbon, and Arca-Swiss) is a mere 4.18 lbs with the Gitzo spikes (legs, no ball head) and actually slighly taller when both folded and extended than the original Gitzo. Replacing just the hub plus weight hook saved 0.53 lbs off the tripod’s weight and dropped the top width to a little over 4″ down from 5.5″ (see Figure 5 & Table 3). 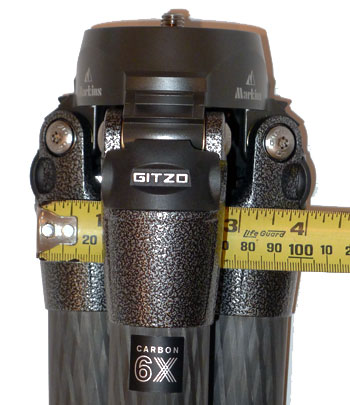 Replacing the steel spikes with titanium (see Figure 6) brought the tripod up to 4.24 lbs, saving 0.47 lbs off the base GT4552TS. As a bonus, the new hub and titanium spikes add about 1/2″ overall to the tripod’s height. Mounting our upgraded Arca-Swiss B1 ball head plus the Pentax 67II adds another 9″ which brings the eyepiece up to 62.3 inches. A rule of thumb is to subtract 5″ from your height to find your eye level. At our 6’1″ height that works out to 68″, just 5.7 inches over the viewfinder. The only downside is that when carrying the collapsed tripod by one leg, my knuckles hit the other legs. Opening one leg slightly solved the problem. 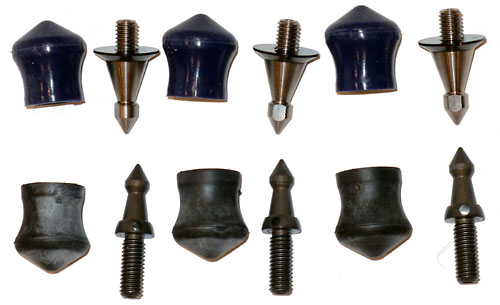 Best of all, the new tripod fits length-wise into a carry-on, even a padded Pelican Air 1525 (see Figure 7). We’ll explore the new Pelican Air hard cases in a future tweak.

You can tailor your tripod to your own needs with third party parts. We modified a sturdy Gitzo GT4552TS systematic traveler tripod from a 4.7 lb model to a lighter 4.24 lb packable that easily fits into a carry-on bag. The new tripod is actually lighter than our old Gitzo 1325 and all current 3-series tripods, yet sturdier.

About Tripod, Head and Vibration (Kim 2007)
Charlie Kim tested the effect of different tripods, ball heads, and cameras on vibration. Complete with vibration graphs, the report shows the effects of various factors on stability, including carbon versus aluminum, mirror lock up, handheld versus tripod, different ball heads (Markins and Arca Swiss were best), and “tuned tripods” with Markins’ bases and tripod hubs plus titanium spiked feet. The report is required reading for photographers looking to get the maximum resolution out of their equipment.
Carry-on Baggage
American Airlines policy for carry-on baggage includes 1 personal item and 1 bag. The personal item dimensions should not exceed 18 x 14 x 8 inches (45 x 35 x 20 cm). The carry on bag dimensions should not exceed 22 x 14 x 9 inches (56 x 36 x 23 cm).
Carry-on Luggage Regulations
Ebags.com lists common airlines and their carry-on size and weight regulations. A bag with the maximum dimensions of 21.2X13.5×7.5 inches would fit within all listed requirements. For carry-on weight, 22 lbs appears to be the domestic weight limit (for airlines that have one) and as little as 15 lbs for overseas airlines.
Gitzo GT3543LS Systematic Carbon Fiber Tripod Review (Carnathan 2016)
Bryan Carnathan reviews the updated Gitzo GT3543LS carbon fiber tripod. While the new version 3 model of the popular Gitzo pod includes a number of improvements, Bryan found that, with a 600mm f/4 lens on the fully-extended tripods, vibrations caused by a firm tap lasted twice as long with the GT3543LS than the GT3542LS, 4 seconds vs. 2. Mentioned in private emails is one of Bryan suspicions – that the O-rings included in the newer model G-lock Ultra leg clamps perhaps contribute to the increased vibration.
Gitzo
Gitzo’s home page on Manfrotto.com. Gitzo makes the GT4552TS tripod, the subject of this article. Note the latest Systematics (version 3) also include series 2 tripods.
Markins
Makers of quality ball heads known for their light weight and stiffness. Markins also makes Gitzo spider replacement tripod hubs (TH-200, TH-230, TH-300, and the discontinued TH-500). They also make an elegant tripod “hook” that works with these hubs, and titanium replacment spikes.
Nikonians
Users group devoted to Nikon camera equipment. Worked with Markins to create the MAGICA tripod series of more compact, lightweight, and reportedly stiffer tripods.
Optimizing the Arca Swiss B1 Ball Head
Extend the life of your ball head and save weight by rebuilding with lightweight components. By rebuilding our Arca Swiss B1 we saved 17.5% off its weight.
Optimizing the RRS Monopod Tilt Head
Learn how to optimize the weight of a monopod tilt head. Using a fixed clamp RRS tilt head and the Desmond skeleton clamp we reduced the head weight by 25%.
TSA raising aviation security baseline with stronger domestic security measures
The TSA is implementing new, stronger screening procedures for carry-on items that require travelers to place all electronics larger than a cell phone in bins for X-ray screening in standard lanes. Following extensive testing and successful pilots at 10 airports, TSA plans to expand these measures to all U.S. airports during months ahead. Note that the stronger screening measures do not apply to passengers enrolled in TSA PreCheck.
Update: Pro Ball Head Review
A solid ball head dampens sharpness-robbing vibration for sharper and smaller images and videos for the Web. Updated with the newest models, we compare some pro-level ball heads and offer some tips for sharper photographs.
Use a Stable Tripod
A stable tripod creates sharper pictures and videos by damping out vibration. Sharper shots mean smaller multimedia destined for the Web.