Website performance issues can often be traced to inadequate or overloaded hosting. Upgrading to a faster server is one of the easiest ways to improve website performance. This article uses Google Analytics to document the speed increases from moving Walkerworldtrade.com from conventional shared hosting to higher speed shared hosting (see Figure 1).

In recent months we’ve explored improvements in site speed and engagement metrics by improving server performance. First we looked at moving a site from mass web hosting to lightly loaded share hosting. First byte times were reduced by 82.1% and load times dropped and became more consistent reducing variability by about 7 fold by moving away from overloaded servers.

Next we tested moving a site from conventional shared hosting to a faster high speed server, complete with RAID solid-state drives, 64GB of RAM, and more. First paint times improved by more than 60% and page load times improved from 24% to 29% faster.

Walker World Trade wanted to improve their page speed to ensure that Google wouldn’t penalize their search rankings. We used Google Analytics to test moving Walkerworldtrade.com from a conventional to a faster high speed server. In addition to the speed improvements shown below, moving to a faster server as well as form simplification improved conversion rates by more than 92%.

The site also improved in metrics before the document fully loads. The average document interaction time (when you can first interact with a web page), improved by 59.3% from 6.3 to 2.6 seconds after the move (see Figure 3). Content loaded faster as well, improving by some 53.4%. So the site feels faster as the start render and subsequent content appears on the screen more than twice as fast and before. The page exit rate improved by 15.4 percentage points from 56.09% to 48.58% (see Figure 4). 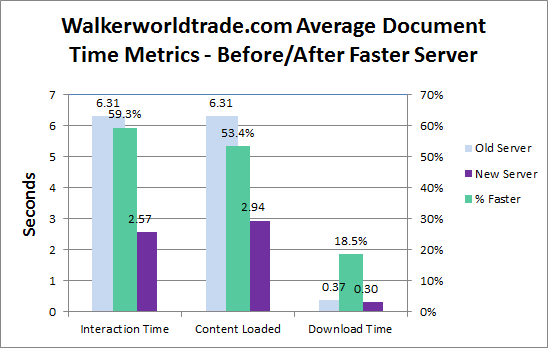 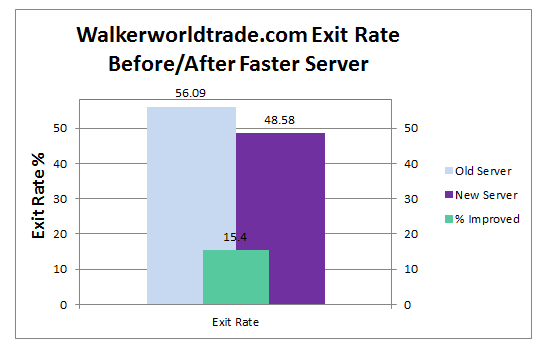 Moving to a faster server can cut page load times by more than half, and improve behavior metrics like conversion and exit rates. You can use Google Analytics to test your site before and after changes to your site.

Avoid Mass Web Hosting
We investigate moving an example site from a slow mass host to a lightly loaded host and measure the results. Server response times were reduced by 82.1% and variability by about 7 fold.
Form Conversion Rate Optimization
Learn how a combination of form optimization and speed improved conversion rates by more than 92%, for Walkerworldtrade.com.
Upgrade to a Faster Server
Upgrading to a faster server can improve web page speed significantly, up to 66% faster for first paint time and 29% for load times. We moved an example site (Phillydentistry.com) to a faster server to test the performance improvements.
Upgrade to a Faster Server: Results
We further explore the results of upgrading to a faster server. Overall Phillydentistry.com showed improved response speed and website “stickiness.” Average page load times improved by 48% to 60% server response times improved by more than 60%, and people stayed longer, viewed more pages, and bounced less.
Walkerworldtrade.com
The import/export website analyzed in this article.